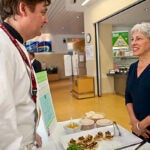 A group of Harvard faculty members has been inducted into the American Academy of Arts and Sciences 230th class of fellows, which totaled 210 new fellows and 18 foreign honorary members.

The 17 fellows from Harvard, officially recognized in an Oct. 9 ceremony, were celebrated for their cutting-edge research and scholarship, artistic accomplishment, and exemplary service to society.

“The induction ceremony celebrates the academy’s mission and the accomplishments of its newly elected members,” said American Academy President Leslie Berlowitz. “Through three centuries of service, the academy and its fellows have been dedicated to intellectual leadership and constructive action in America and the world.”