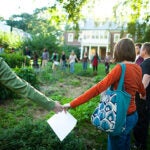 Each year the Harvard Admissions Office honors some of its most loyal and longtime volunteers in schools committee work all over the globe. The Hiram Hunn Award recognizes alumni and alumnae who have been especially effective in their interviewing and club work and for their unusual longevity. The contributions these women and men make to the admissions process are invaluable.