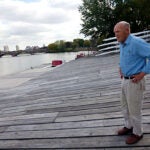 A river runs through it

The stands at historic Harvard Stadium are empty, the vacant seats and aisles a dim reminder of the raucous crowds at major football games like Harvard-Yale. But most evenings, there is still plenty of action on the playing field: the battle for the Straus Cup, Harvard’s House intramural (IM) sports championship.

Winthrop House has won the intramural prize the past three years. IM is serious business at Winthrop, where last year more than 200 students helped to win the title.

Maria Persson Gulda, a graduate student and Winthrop’s IM tutor, touts the positives of the competition, emphasizing the House spirit that the sports help to shape. Alex Ahmed ’10, who previously was Winthrop’s IM rep, said, “I played three sports in high school. I played 12 sports in IM.” Last year, Ahmed even learned to skate to play ice hockey.

And, yes, Winthrop so far this year is rolling along once more, with a 20-2 record.