A focus on British art 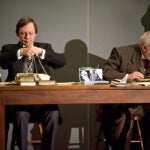 On God and evolution

Nestled in a small enclave on the Arthur M. Sackler Museum’s fourth floor is an intimate art display that subtly illuminates both present and past. The prints and engravings by several British artists from the early 19th century invite viewers into a mysterious world of mythology, mayhem, and malaise, while conveying both classical and contemporary themes.

The collection is part of the museum’s teaching-gallery installations that link selected objects to an undergraduate course in Harvard’s Department of History of Art and Architecture.

The exhibit is connected to the class “The Past and the Present: British Art of the 19th Century,” taught by David Bindman, the 2010 Sheila Biddle Ford Foundation Fellow at the W.E.B. Du Bois Institute for African and African American Research at Harvard. He is also the emeritus professor of the history of art at University College London.

The Harvard Art Museums’ robust collection of British works is considered one of the finest in the world but remains largely unknown because of lending restrictions, said Bindman during a gallery talk on Oct. 21, deeming it a type of “hidden collection.”

He called his choice to turn a contemporary lens onto works by Pre-Raphaelite artists something of a “paradox.”

“Much of the subject matter [in their works] concerns the ancient or the medieval world or the world of myth or literature. But of course in every case there is some contemporary implication.”

Featured works by English poet and illustrator William Blake are an example of art that creates “an interesting tension,” said Bindman, by engaging past and present.

In the work “Frontispiece for ‘America a Prophecy,’ 1793” — the cover of Blake’s  book “America a Prophecy” — muted hues and striking subject matter give the piece an unsettling tone. An angelic statue sits forlornly under a sky of foreboding clouds. The statue’s head is down and its arms shackled. In the foreground lies a cannon, in the background an ancient city. The image’s effect is anything but heavenly.

Blake’s book is about the American Revolution, said Bindman, and the artwork “seems to suggest a continuity between the past and the present. It refers on one hand to contemporary wars, but also perhaps to the eternal pattern of war and destruction that’s effectively an issue of humanity.”

Bindman remarked that an incomplete illustration by Blake, part of a series depicting images of author Dante Alighieri’s “Divine Comedy,” represents the Italian poet’s “Inferno” and offers viewers a profound look at Blake’s own take on theology through an inscription by the artist on the page. In theory, the finished image would have been covered with some kind of pigment, permanently erasing Blake’s comments from view.

Blake’s words reveal the artist’s hatred for the notion of Dante’s Inferno, and confirm Blake’s belief in Christianity’s “forgiveness of sins” and his sense that Dante ultimately “takes the wrong path,” Bindman said.

Other artists in the exhibit include Henry Fuseli, Frederic Leighton, and William Morris.