A course as gateway 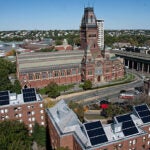 Creating power by the Yard

Studying art from close up makes all the difference

One of the great joys of studying art history at Harvard is the emphasis that the History of Art and Architecture Department places on studying works of art in person.

The Harvard Art Museums are, of course, a phenomenal resource, and many of my classes have met in the galleries or have devoted particular consideration to prints or photographs that have been pulled from storage for the students’ benefit. Other classes I have taken, such as my freshman seminar with Professor Joseph Koerner on genre painting in Boston-area museums and my sophomore tutorial on medieval art in American collections, have ventured beyond Harvard’s walls to the Isabella Stewart Gardner Museum, the Museum of Fine Arts in Boston, and even the Metropolitan Museum of Art and the Cloisters in New York City.

But the most remarkable opportunity by far comes in the form of the sophomore excursion course. HAA100r was begun in 2008 thanks to a grant from David Rockefeller Jr. The course meets once a week during the spring semester to prepare students for what they are about to discover during the trip itself, which takes place in May just after exams and before Commencement.

In the initial year, students traveled to Turkey, where one of my close friends, an avowed modernist, fell in love with an Ottoman mosque and switched her focus field to Islamic. The following year, my classmates and I embarked on a whirlwind tour of Spain, accompanied by four outstanding professors. We spent the first five days in Madrid, where we visited the Prado four times, including one unforgettable time where officials kept the museum open late so that we could have the galleries to ourselves, as Hugo Van der Velden, professor of northern Renaissance art, discussed the intricacies of Rogier van der Weyden’s “Deposition” and the eccentricities of Hieronymus Bosch’s “Garden of Earthly Delights.” We had the same once-in-a-lifetime opportunity at the Reina Sofia museum, which allowed us to enter an hour before opening to admire Picasso’s “Guernica” and participate in a lively discussion moderated by Professor Benjamin H.D. Buchloh.

I’ll never forget trekking through the ruins of Madinat al–Zahra with Professor David Roxburgh, tracing the trajectory of Goya’s career, from Rococo tapestry cartoons to the macabre Black Paintings, with Professor Buchloh, or debating the mysteries of the mirror in Velázquez’s “Las Meninas” with Department Chair Thomas Cummins.

Yet the moments that stand out most are the ones between the organized visits. I remember sitting in a beautiful Spanish square eating tapas as Professor Cummins and his wife talked about trips to Latin America. I remember riding the bus to a flamenco performance in Seville as Professor Buchloh shared stories of interviewing Andy Warhol at The Factory. I remember Professor Van der Velden asking my friends to pose as figures in a Van Eyck painting in front of a window at the Alhambra because he had a theory about the landscape Van Eyck had depicted. I remember Professor Roxburgh chronicling how he as an aspiring sculptor in Scotland came to become a specialist in Arabic manuscripts. I remember heaping plates of exotic shellfish at a Galician seafood restaurant, and decadently delicious chocolate con churros around the corner from our hotel in Madrid.

It has been well over a year since I returned from Spain, but the trip has left a lasting impression. When I was in New York last summer, a group of us went out to lunch with Professor Roxburgh, and it was wonderful to know that even back in the States, we can interact with faculty outside of an academic setting. This semester, I am beginning to write my thesis under the supervision of Professor Buchloh, whom I might never have known or had the courage to approach had it not been for the excursion course. And recently we had what we call a HAApy hour, for all the History of Art and Architecture (HAA) students in our year to come together in a social setting, as we did in Spain.

Everyone has those moments during a Harvard career, after hearing a particularly exciting speaker at the Institute of Politics or having a prize-winning researcher take you under his or her wing, when you suddenly understand why you are here. The sophomore excursion course was mine.