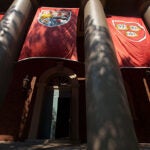 Fisher is the registrar at the Peabody Museum of Archaeology and Ethnology, where she oversees acquisitions, loans, and documentation of the museum’s vast collection of artifacts. Sometimes, this Maryland native even serves as a liaison for those artifacts, escorting them to the airport, overseeing their proper handling and adherence to TSA regulations.

Colby is a scientific instrument maker at the Harvard School of Engineering and Applied Sciences’ Rowland Institute at Harvard, located along the Charles River. He calls himself a machinist, can work with virtually any material, and labors in a basement workshop so equipped it would make your handyman blush.

Yet Fisher and Colby are more alike than not in a key way. Both have worked at Harvard for 25 years.

They are but two of dozens of Harvard staff and faculty being honored at the 56th annual 25-Year Recognition Ceremony. The event, which will be held on Oct. 13 in Sanders Theatre, will be hosted by President Drew Faust and will feature remarks from honorees as well as musical performances.

But Fisher and Colby never had Harvard on their radar. Working here was all a matter of happenstance, circa 1985.

Colby worked with machines his whole life, even dabbled in the family business of plumbing before teaching art and technical education for 20 years at Taunton High School. It suited him, he said, “working with young people.” While completing a master’s degree in vocational administration from Fitchburg State College, Colby learned that “a friend at the Rowland Institute was looking for an assistant.” And that was that. At Harvard, Colby furthered his work with young people — burgeoning scientists, he said, who needed equipment tailor-made to their liking.

“My career all started with an overdue library book,” Fisher recalled.

Then a newlywed, Fisher wrapped up fieldwork for a Ph.D. in anthropology at the University of Pennsylvania and moved to Cambridge to be with her husband. At the time, she had no job, and, while returning a late book to Tozzer Library, stumbled into an old Penn colleague who suggested she apply at the Peabody Museum.

Fisher had traveled extensively across England performing fieldwork, but once hired at Harvard, she realized that museum administration “was a better field for me.” Fisher had left her doctorate dangling in the balance when she moved north, but completed it in 1999 while at Harvard, in what Fisher refers to as her “20-year project.”

She counts assisting with the Lewis and Clark bicentennial exhibit as her midcareer highlight. “The Peabody was the largest institutional lender,” she said. “We loaned 50 objects. It was incredibly important nationally … as well as just being really cool.”

“I love that I am still learning every day,” she said. “When I was informed about my 25-year service I was so blown away, because I feel really lucky.”

Colby loved working alongside the Rowland’s scientists, especially those from its junior fellows program. “They’re all young, which fits with my teaching,” said Colby, who’d help them outfit a lab from scratch. “It’s been exciting because we’ve hosted so many people from around the world.”

“I am going to miss it,” he said on his last day. “Although I’ve been weaning myself with a lesser schedule, I feel it now.”

He plans to travel with his wife, Annie, to visit relatives in Arkansas and Nevada. An avid gardener, Colby is also rehabbing a barn behind his 165-year-old house.

“I’ll still miss the people,” he said. “This is a great place, it really is.”