Forward, into the past 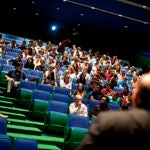 The speedup of climate change

This summer I worked on an intriguing research project on active galactic nuclei (AGN) at the Harvard Smithsonian Center for Astrophysics (CfA). AGNs, which include quasars, are some of the most interesting and spectacular phenomena in astrophysics and rank among the most luminous, distant, and oldest objects in the universe. AGNs can be distinguished from normal galaxies by the fact that they typically radiate energy from a compact central source, a black hole, which is equal to or brighter than all of the stars in its galaxy.

I have been interested in astronomy and physics since I was 5 years old, and in particle physics, cosmology, and astrophysics in more recent years. So when I was offered the opportunity to conduct research at the CfA this summer with support from a Herchel Smith Harvard Summer Undergraduate Research Fellowship, I was thrilled.

The CfA is a remarkable place where, in addition to being home to the Harvard Astronomy Department, more than 500 astrophysicists conduct some of the most advanced astrophysics research in the world.  My research advisers at the CfA were Martin Elvis, a senior astrophysicist and a leading authority on quasars and AGNs, and Francesca Civano, a postdoctorate fellow and rising figure in the field.

The CfA also operates ground-based telescopes in Arizona and Chile and is heavily involved with space-based telescopes like the Chandra X-ray Observatory, launched from the Space Shuttle in 1999. Earth- and space-based telescopes are important to astrophysicists because they allow them to look out great distances (and therefore far back in time) to study complex questions, including how the universe developed and evolved.

In my own research, data from the COSMOS Survey, obtained by the powerful Keck telescope in Hawaii, allowed me to look back billions of years in time at the light and physical properties of AGNs as they existed when the journey of their light began. So, in a very real sense, telescopes can be thought of as virtual time machines, since we view light that was emitted long ago.

There are a number of reasons why active galaxies can be considered among the most spectacular of all astronomical objects. Perhaps the most prominent is that the source of AGNs’ power is thought to come from super-massive black holes at their centers that produce tremendous amounts of radiation from gravitational energy. In the process, matter falls into the black hole. But much of it (in the form of hot winds and high-energy jets) explodes away from the center, producing enormous luminosities.

While quasars can look as if they are point-like stars, they can outshine all the stars in their galaxies by a factor of 100 to 1,000 times, making it difficult, if not impossible, to see the stars of the galaxy.

Because the oldest quasars are so far away (for example, 12 billion light-years), we would never be able to see them if not for the tremendous power-producing abilities associated with their super-massive black holes. Some of these can weigh up to 10 billion times more than our star, the sun.

Interestingly, the area that the AGN super-massive black hole occupies, from which its enormous power is created, is of relatively small size compared with its host galaxy.  An analogy used by the Chandra X-ray Center, for example, compares the compact central region to a small flashlight generating as much power as all of the homes and businesses in greater Los Angeles.

With these key AGN characteristics in mind, the purpose of my research, titled “Optically Faint X-ray Selected Active Galactic Nuclei,” was to take certain astrophysics measurements of a sample of about 150 AGNs in the COSMOS field that had not been measured previously, as well as to perform more specialized analysis on a sample subset.

Some of the basic findings of the research were that the sample AGNs are an average of 8 billion light-years away from Earth, which is typical for AGNs of this kind. The results from the overall sample also showed a correlation between luminosity and the quality of the sample fit. In addition, spectral analysis of the AGNs that contained oxygen and neon emissions lines indicated that star formation was taking place that would be consistent with current models of active galaxy evolution.

During the summer, I learned that astrophysics research is very expensive and takes time (lots of it), in part because of the complexity of the questions being asked, the huge distances involved, and the precision that is essential to the process.

Also, while much has been written about the field, the issue of how to approach the key questions of astrophysics is only indirectly discussed. The guidance and “handing down of knowledge” from mentors is a central tenet, without which one could not make the important connections necessary for true understanding.

Much is written in the popular press about the need for collaboration and globalization. But in astrophysics, such cooperation is a norm, as evidenced by the many papers written with 10 or more colleagues around the world.

Perhaps this close collaboration should not be surprising, since astrophysicists are among the few researchers trying to understand the very beginnings of the universe, its structural formations, and its likely future course. Then again, maybe it’s just fun getting to work with colleagues using a virtual time machine.