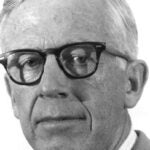 John Case Nemiah, Professor Emeritus of Psychiatry at both Harvard Medical School and Dartmouth Medical School, died on May, 11 2009, at the age of 90, in Nashua, New Hampshire. Widely beloved as a teacher, editor, academic leader and friend, he served as the Psychiatrist-in-Chief at the Beth Israel Hospital from 1968 to 1985.

John Nemiah was born in Cheshire, Connecticut on November 30, 1918, and moved as a small child with his family to Hanover, New Hampshire, where his father, Royal Nemiah, became Professor of Classics at Dartmouth College. John’s childhood was shaped by an environment that taught love of language and love of truth, along with liberal doses of good manners, moral and social responsibility, and self discipline. Interested in words and literature from an early age, John received a classical education in Greek and Latin at the Hotchkiss School in Connecticut where he also developed his initial interest in psychiatry by reading Freud. He majored in classics at Yale as an undergraduate and then went on to Harvard Medical School, graduating with honors in 1943. His post-graduate training included a medical internship on the Harvard Service at Boston City Hospital, psychiatry residency at Yale and Massachusetts General Hospital interrupted by two years military service as a neuropsychiatrist, and a year of neurology residency on Denny-Brown’s unit at Boston City.

Following three years as a staff neuropsychiatrist at Tufts, in 1952 John joined the MGH Psychiatry faculty under Stanley Cobb and for much of his 16 year tenure there served as the Chief of the Inpatient Psychiatry Unit. With Peter Sifneos during this period he began both psychosomatic research and pioneering short-term psychotherapy research, and completed psychoanalytic training at the Boston Psychoanalytic Institute. At MGH he also began his famous Saturday morning lecture course on Psychopathology and Psychodynamics for the second year HMS students in which he illustrated psychological phenomena, to often disbelieving students, by playing tape recorded interviews with patients. It is said that these medical student lectures were so successful that surgeons at MGH complained that John was making all of the HMS students want to become psychiatrists. His best selling textbook “Foundations of Psychopathology”, published in 1961, grew out of these lectures and almost 50 years later is still in press as a classic description of the relevance of the concepts and principles of psychopathology to the practice of clinical medicine.

After serving three years as the Acting Chief of the Psychiatry Service and Head of Harvard’s Department of Psychiatry at the MGH, in January 1968, John succeeded Grete Bibring as Psychiatrist-in-Chief at the Beth Israel Hospital and Professor of Psychiatry at HMS. As Chief he facilitated the Beth Israel’s ongoing excellence in psychodynamics and consultation-liaison psychiatry, and continued the department’s strong alliances with medicine, surgery and ob/gyn. With his colleagues Peter Sifneos and Fred Frankel, who had come with him from the General, John continued important research and clinical work in psychosomatics, alexithymia, and short-term psychotherapy.

At Beth Israel John optimized the human qualities that bring young people into psychiatry and welcomed new ideas and new people while also respecting those faculty members from the old era. Those of us who were in his Beth Israel department felt that John had the unusual capacity to be supportive of the interests and autonomy of faculty members without interfering with the pursuit of our own goals. It was characteristic of him to encourage faculty to innovate and to foster their efforts without stating his opinion about their choices and passions. John was unusual for that era in being supportive of the career goals of the women faculty in his department and he helped them get appropriately promoted at the Medical School. His ability to facilitate negotiation and resolution of difficult issues at the hospital was also appreciated by HMS, where he was appointed Secretary to the Faculty of Medicine from 1968 to 1973.

In 1985 at the age of 67 John “retired” from the Beth Israel and returned to the Hanover of his youth and Dartmouth Medical School. At Dartmouth, he took on a substantial teaching and clinical supervision load with residents and medical students, becoming the most sought-after teacher in that department, and he continued this teaching for most of the rest of his life. The excellence of John’s teaching had been widely recognized at Harvard and he was selected by the HMS graduating Class of 1967 to deliver its Class Day address. The broader scope of his teaching was recognized two decades later when he was selected by the Association for Academic Psychiatry, the country’s leading organization of psychiatric teachers and educators, to receive its Outstanding Psychiatric Educator Award.

John was a national leader in Psychiatry. Most notably, in 1978 he was given the opportunity to combine his love of language and expertise in teaching when he became the 10th Editor of the American Journal of Psychiatry, the leading scientific journal in the field. While maintaining the Journal’s 75 percent rejection rate, John’s careful personal evaluation of each submission and his famously helpful handwritten letters to authors made him a teacher to the entire field of psychiatry. During his 15 year tenure as its Editor, the Journal made important advances, standardizing and strengthening its review process, increasing the breadth of its papers, and adding substantial scientific rigor which made it into the first choice journal for psychiatric authors and readers. John retired as Editor of the Journal at age 75, eight years after stepping down at the Beth Israel.

John was both a gentleman and gentle man. He was deeply humble and unencumbered by any sense of entitlement, narcissism, or self-important pride. John epitomized the good teacher whose wisdom, literacy, and ability to simplify and clarify within the context of a learning relationship served as a role model for many of us who have strived to live up to his example and high standard. His kindness and encouragement to students, faculty and authors, his exquisite use of the English language to promote understanding, and his integrity, sense of humor, capacity for empathy, and sensitivity will be warmly remembered by all of us who have been fortunate enough to be its beneficiaries. John’s generosity to so many in promoting their careers and enriching their lives is his lasting legacy.

John Nemiah is survived by his daughter Ann Conway, his two sons, James and David, a step-daughter, Elaine Cohen, and eight grandchildren. His second wife, Margarete, to whom he was married for 32 years, died in 2007.