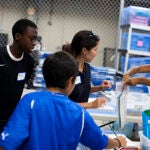 Last year, when David Weitz from the Harvard School of Engineering and Applied Sciences (SEAS) invited renowned chef Ferran Adrià to host a public lecture on molecular gastronomy, the result, said Weitz, was a “mob scene.”

Adrià, a sensation in his native Spain who boasts a cult following among haute cuisine’s in-the-know, spoke about his three decades-long career of utilizing scientific techniques in his Michelin 3-star restaurant elBulli on Spain’s Catalonian coast.

“The response really gave us some hint of what was to come,” said Weitz. “For Ferran, it was a way of bringing science to cooking, and for me it was a way to get students truly into physics.”

Weitz, Mallinckrodt Professor of Physics and of Applied Physics at SEAS, invited Adrià back to Harvard this semester to help teach SPU27, “Science and Cooking: From Haute Cuisine to the Science of Soft Matter.” The class, open only to undergraduates, is part of the new General Education curriculum, which introduces students to subject matter and skills from across the University, and does so in ways that link the arts and sciences with the world that students will face and the lives they will lead after college.

“Science and Cooking” features a revolving door of instructors, including regular teachers: Weitz; Michael Brenner, Glover Professor of Applied Mathematics and Applied Physics; Amy Rowat, research associate in applied physics; Otger Campas-Rigau, postdoctoral fellow in organismic and evolutionary biology — and some of the most innovative chefs of our time, including Adrià’s protégé, José Andrés.

To kick off their course, Adrià and Andrés spoke Tuesday night (Sept. 7) at the Loeb Drama Center. Harvard College Dean Evelynn M. Hammonds was on hand to introduce the event, along with SEAS Dean Cherry A. Murray, who both officially came out as “foodies.”

“Our program in Ged Ed and this course, in particular, strives to capitalize on Harvard’s strength to develop innovative and effective teaching and learning,” said Hammonds. “The buzz around this course has been frenetic. We had to run a lottery to bring the number of students who could take this course down.”

But, she emphasized, “This is a serious science course. This is not ‘pasta for poets,’ or ‘eggs for economists,’ or even ‘soufflés for sociologists.’ ”

“SEAS will continue to bring the worlds of applied sciences and cooking together for many years to come,” said Murray.

The real star of the show was the enigmatic Adrià, who spoke only in Catalan, translated by Andrés.

“Cooking is a language. Work in avant-garde cooking is to create a new language with new techniques, concepts, and products,” said Adrià. “I want to thank everyone for making something really historical. This course is going to be really important.”

Adrià spoke about evolving cooking forward through science, and called on universities to help make that happen. As of next July, he said, elBulli will close its doors as a restaurant, but will become “a center for creativity” and will publish its goings-on on elBulli’s website.

“I see life through curiosity and a willingness to learn,” said Adrià.

Andrés said that Adrià’s success is attributed not only to his creativity, but also to his sharing of it. “This man has opened his knowledge to the world,” he said. “Generosity is really what opens doors in the world.”

With that, the two chefs demonstrated spherification, a key technique of taking liquid and reshaping it into a sphere, thanks to a water bath infused with either calcium or alginate. The result was olive oil caviar — hard on the outside, gooey in the middle.

“Cooking never, ever got into university,” said Adrià. “Tomorrow, all the world will be talking about this moment.”