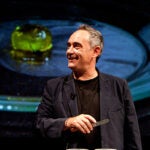 Humanists create a home at Harvard

A sneeze rang out during a ceremonial open house Tuesday (Sept. 7) for the new humanist center at Harvard. On cultural autopilot, someone responded: “God bless you.” Oops. Sometimes God happens.

At the mention of a deity, two Roman Catholics in the crowd of 30 — both undergraduates visiting with an atheist friend — traded high-fives. Everyone else laughed.

The three-word sneeze sermon was an auspicious start — call it a secular blessing — for the new community center at 19 Arrow St. It’s the first of its kind on a U.S. campus, and the first official gathering spot for Harvard’s community of nonbelievers, estimated at 1,500.

Non-Harvard nonbelievers are welcome at the center too, which receives no financial support from the University.

“We’re trying to use this space to build the core of a community,” said Greg M. Epstein, Harvard humanist chaplain and author of the recent bestseller “Good Without God” (HarperCollins, 2009).

He called the book’s title “the three words that still sum it up most quickly for me,” the idea that the world’s 1 billion nonreligious people have values that embrace personal morality and public charity.

A poster in the small space claimed that 40 million Americans call themselves humanists, atheists, agnostics, freethinkers, or just secular. But don’t try fitting all of them into the new community center. It’s a beautiful set of two rooms — all eccentric angles, muted colors, and high windows. But it’s compact.

Snug as it is, the Arrow Street space is a long step up from Epstein’s closet-size office in the basement of Harvard’s Memorial Church. That was so small, said Sarah Chandonnet, M.T.S . ’09, that she often had to pull up a chair in the corridor. (Chandonnet is the Humanist Chaplaincy’s campus organizer.)

“We’re going to try to use this space as creatively as we can,” said Epstein, who, by the way, will keep his church office.

Plans for the center include: a monthly open house; weekly meetings of the Harvard Humanist Graduate Community and the Harvard Secular Society (for undergraduates); a biweekly meditation group on Saturdays; and a biweekly Humanist Forum on Sundays.

The first forum, led by Epstein, will be held from 1:30 to 3:30 p.m. this Sunday (Sept. 12). The next sessions will feature “Friendly Atheist” blogger Hemant Mehta (Sept. 19) and Sean Faircloth, director of the Secular Coalition for America (Oct. 3).

The Humanist Chaplaincy at Harvard will also host outspoken atheist and author Sam Harris on Oct. 15 at 8 p.m. in the Memorial Church.

The new center has turned the Arrow Street neighborhood into a medley of religious (and irreligious) options. It’s across the street from the Harvard Catholic Student Center and around the corner from Harvard Hillel.

The office has welcomed Catholic guests from across the street before, he said. “We should be culturally literate about each other as communities.”

For the open house, Cameron Niven ’13, an atheist who was raised a charismatic Christian, brought along three Catholic friends.

The humanist camaraderie will be welcome, she said, and the outreach too. There are a lot of misconceptions about the nonreligious, that they’re immoral, “and that we don’t do any good in the world,” said Niven, a neuroscience concentrator.

Good deeds and right action do not rise out of religious values alone, said Epstein.

“We live in a world, this one world, this natural world, that we experience from birth to death,” he said. “We can’t know of any life before this one or any life after this one. So we feel all the more pressure to make this life count, to do with it the very best we can for ourselves, for one another, and for the entire world.”