How to get happy 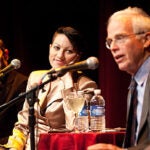 The dark corners of ‘Cabaret’

Boks relay what they’ve found in research and in life

The former Harvard president and his wife, a current Harvard fellow, offered their perspectives on happiness, the impact it has on teaching, and their approaches to well-being in political and philosophical contexts, during a discussion on Tuesday (Sept. 28) at the Harvard Graduate School of Education (HGSE).

Howard Gardner, the Hobbs Professor of Cognition and Education, moderated the discussion.

The couple is well-schooled in the topic. Derek Bok recently penned “The Politics of Happiness: What Government Can Learn From the New Research on Well-Being,” while his wife Sissela is the author of “Exploring Happiness: From Aristotle to Brain Science.”

In addition to family, the Boks said they revel in each other’s opinions and intuitions. Reviewing and editing each other’s work, sharing ideas and insights, and discussing books and articles is also rewarding, they agreed. Derek Bok said he was grateful to be able to draw on his wife’s vast knowledge of fields such as philosophy, literature, and psychology, calling that “hugely helpful” in his own work.

Responding to a question about the role that media can play in people’s happiness, Sissela Bok, a senior visiting fellow at the Harvard Center for Population and Development Studies, said children as early as age 2 have a capacity for empathy and concern for others. “That can be either fostered or it can be eroded and worn down,” she said, “by the messages that come from the culture.”

Children, she argued, have to resist messages from media that inundate them with visions of happiness and violence, and learn to “be skeptical” from an early age.

Derek Bok said the overall conclusion drawn from his research concerns what fundamentally makes people happy. It’s ultimately not a flush bank account that sits at the true center of happiness, he said, but what people do that brings lasting joy.

“On the whole, the things that happy people do and the things that make you happy tend to be things that are good for society and good for other people,” said Bok, such as being active in your community, being in a strong marriage, and engaging in “senseless acts of kindness.”

In relating happiness to the academic realm, Derek Bok said less attention should be placed on the drive to develop a competitive workforce, and more should be geared toward creating a better-rounded education.

Developing “ skills in the workplace comes at the expense of things that make people happier, like art and music and civic engagement … exercise, sports, and athletic pursuits,” said Bok.

In colleges, teachers need to do a better job of informing students about “different professions, different vocations, different callings, and what we know about the effect they have on happiness.” Professional schools too should do more than just teach facts, but offer their students a vision of how they can “achieve a real sense of self-worth and fulfillment in a profession.”