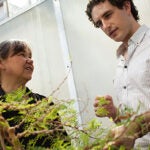 I’ll get mine, Jack

It’s a long reach from the almost-not-there horns of a giraffe to the massive antler spread of an adult moose. And that is outstripped by the largest-ever span of the extinct Irish elk — which is neither exclusively Irish nor an elk, for those keeping count.

That contrivance could reach the rim of a basketball hoop from the ground. At 80 pounds, just imagine carting it around on your head.

To help spur the imagination, the Harvard Museum of Natural History (HMNH) has mounted a new exhibit on horns and antlers that examines where they came from, what they’re used for, and their differences. “Headgear: The Natural History of Horns and Antlers” has opened in the museum’s special exhibit space and will run through Jan. 2.

Hopi Hoekstra, Loeb Associate Professor of the Natural Sciences and curator in mammology in the Harvard Museum of Comparative Zoology (MCZ), said the exhibit was inspired by the MCZ’s extensive and diverse collection of horns and antlers, spurred somewhat by the impending move of the MCZ’s research collections into new space in the basement of the Northwest Laboratory building.

Hoekstra said seeing the collection immediately raises questions that might not be asked if someone was examining less-visible features.

“It raises natural questions: What’s the difference between horns and antlers? Why are some bigger? Do both sexes have them?” Hoekstra said. “One thing I love about this exhibit is you’re immediately struck by the diversity and you can’t help but wonder why. That’s what museums do, get people asking questions.”

The exhibit, which tells its story through graphic panels and display cases, video, and the exhibit’s stars — animal heads on the walls — doesn’t leave the visitor hanging on the what, when, and why. Horns and antlers arose in a group of mammals called Artiodactyla, which evolved some 55 million years ago and includes deer, cows, moose, sheep, and goats.

Though sometimes the words “horn” and “antler” are used interchangeably in everyday speech, they differ. Horns tend not to be branched, are retained year after year, and have a bony core covered by a sheath of hard material called “keratin” (the same substance that makes up our fingernails). Antlers, on the other hand, are usually branched, replaced each year, and made up just of bone, although they have a nourishing, fleshy coat called “velvet” while they grow.

In some species, Hoekstra said, both males and females have horns or antlers, and in others just males do. These are mostly used by males in their battles for supremacy and the right to mate with nearby females, but they may also offer protection against predators.

HMNH Executive Director Elisabeth Werby said the new exhibit is a good complement to the permanent exhibit on evolution, through which visitors pass to reach “Headgear.”

“The number and diversity of specimens in this exhibition offer a new perspective on familiar creatures like deer and sheep and a rare look at some that are more exotic and strange. It’s a unique opportunity to contemplate the process of evolution,” Werby said.