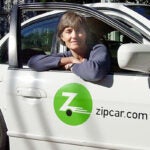 Baby, you can drive my Zipcar

Mentors offer time, advice to ease transition back into workforce

When Paul Dunphy began working at Harvard as an electric and compliance inspector, he thought his military involvement was long behind him. Little did the Vietnam veteran know, his Harvard connection would lead him to mentor a young soldier about to leave the Army and transition to the corporate world, something Dunphy went through decades ago.

“I thought we Vietnam vets were long forgotten,” he said. “This has been a golden opportunity for me to get in touch with today’s younger veterans.”

Dunphy is one of 12 Harvard employees who work with American Corporate Partners (ACP), a national mentoring program dedicated to helping veterans transition from the armed services to the civilian workforce through mentoring, career counseling, and networking with professionals from some of America’s best corporations and universities. Mentors such as Dunphy help their protégés with everything from identifying transferrable skills to preparing for job interviews to networking with contacts in key businesses.

“It is a dramatically difficult transition,” Dunphy said. “It’s hard for anyone — whether you’re a college graduate or a veteran — to transfer to the corporate world.”

Harvard has partnered with ACP, and last week the two organizations hosted a happy-hour networking event for mentors, protégés, and veterans at Tommy Doyle’s Pub in Harvard Square. More than 50 people attended the event, making connections and learning more about ACP.

“The fact is while you were out five years in the Army, there were guys who spent five years learning what corporate America is like,” said Nate Machado, a West Point graduate and former Army officer who is now at the Sloan School of Management at Massachusetts Institute of Technology.

After working with an ACP mentor at Morgan Stanley, Machado thinks he is on par with others in the job market now.

“It’s put me on a much more level playing field,” he said.

The purpose of ACP is not to get jobs for veterans, but rather to enable them to get themselves jobs. Melissa Brown, director of the Harvard Center for Workplace Development, had been working with an ACP protégé who is trying to switch careers.

“Veterans have tremendous transferable skills,” she said. “They’re strong on logistics, organization, planning, and discipline. Those can transfer to strong leadership skills within a company.”

Since Brown’s protégé, Peggy Laneri of Upton, is looking to make a career switch into executive coaching, Brown has been talking with her about what the field is like, and giving her names of contacts who might be able to help her learn about running a business or who can be networking contacts.

“We haven’t known each other that long,” said Laneri, who just met Brown six weeks ago. “But already this has been very, very helpful.”