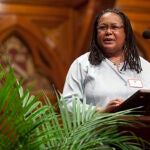 Harvard University’s endowment earned an investment return of 11 percent for the year and was valued at $27.6 billion as of June 30. The return was 160 basis points above what would have been earned by the Harvard Management Company’s (HMC) benchmark policy portfolio.

“Fiscal year 2010 was an important and productive year for the Management Company,” said Jane Mendillo, president and CEO of HMC. “We generated strong returns and improved the flexibility of the portfolio while actively managing our risks and pursuing innovative investment strategies.”

The University’s endowment provides critical funding for Harvard’s educational and research objectives. In fiscal 2010, distributions from the endowment contributed more than a third of the University’s operating budget. Endowment income supports Harvard’s academic programs, science and medical research, and student financial aid programs, which permit the University to admit qualified students regardless of their ability to pay. Harvard’s endowment also enables the University to undertake specific activities that donors have supported over time, targeted to areas such as financial aid, faculty salaries, and facilities maintenance.

The University remains committed to supporting financial aid for undergraduates, which is expected to increase about 7 percent for fiscal 2011. More than 60 percent of Harvard undergraduates are receiving need-based scholarship aid this year, totaling $158 million, and two-thirds now graduate debt-free. Throughout Harvard, scholarships and awards to students from University funds have almost tripled over the past decade, reaching $340 million. The College’s industry-leading financial aid policies are designed to make Harvard more affordable for families across the economic spectrum and have remained firmly in place despite the current economic downturn.

The endowment’s total value is affected by several factors each year, including investment returns, new contributions, and the annual payout for University programs. The endowment stood at $26 billion on June 30, 2009.

The endowment is not a single fund, but more than 11,000 individual funds, many of them restricted to specific uses such as support of a research center or creation of a professorship in a particular subject. The funds are invested by HMC, which oversees the University’s endowment, pension, trust funds, and other investments at a significant cost savings compared with outside management.