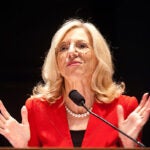 Evolutionary biologist to join Faculty of Arts and Sciences

William “Ned” Friedman, an evolutionary biologist who has done extensive research on the origin and early evolution of flowering plants, has been appointed director of the Arnold Arboretum.

Friedman, set to start on Jan. 1, will be the eighth director of the Arboretum, which is administered by Harvard’s Office of the Provost. He also will be a tenured professor in the Faculty of Arts and Sciences. His priorities include strengthening ties between the Arboretum and the Cambridge campus and working closely with the Arboretum’s neighbors in Jamaica Plain and Roslindale.

“Ned’s appointment underscores Harvard’s commitment to integrating the incredible resources and opportunities presented by the Arboretum with the important work of our scientists here in Cambridge,” said Provost Steven E. Hyman. “As an FAS faculty member, Ned will be a part of the Harvard community. As director of the Arboretum, he will seek closer ties, not only with our Cambridge campus, but also with the city of Boston, the Arboretum’s home.”

Part of Boston’s Emerald Necklace of parks, the 265-acre Arboretum, founded in 1872 and designed by Frederick Law Olmsted, is free and open to the public every day of the year. Its programs and events include lectures and community outreach initiatives in neighboring schools.

“Professor Friedman’s appointment creates an exciting opportunity to connect the unique resources of the Arnold Arboretum in Boston to the plant science research and education occurring on our Cambridge campus,” said Jeremy Bloxham, FAS dean of science. “Ned’s teaching and leadership will facilitate closer linkages between the educational and research possibilities the Arboretum presents and the innovative scholarship of our faculty and students.”

Friedman’s research has focused on patterns of plant morphology, anatomy, and cell biology. He was recently acclaimed for his discovery of a new type of reproductive structure in an ancient flowering plant that may represent a critical link between flowering plants and their ancestors.

Friedman also has a keen interest in the history of science, particularly the intellectual history of evolutionism. He has designed and taught courses on the life and work of Charles Darwin and other historical figures, and lectured on the subject at natural history museums and other venues.

On Nov. 4, Friedman will deliver a lecture at the Harvard Museum of Natural History on “Darwin’s ‘Abominable Mystery’ and the Search for the First Flowering Plants.” He plans to launch a Director’s Lecture Series at the Arboretum that will make accessible to the public cutting-edge research by leading scientists from Harvard and around the world.

“I am thrilled to be able to welcome a diverse group of audiences to the Arnold Arboretum, one of the world’s leading resources for the study of plants, and help integrate it more deeply into the research and teaching missions of Harvard University,” said Friedman. “I am also deeply committed to building on the Arboretum’s robust history and its ongoing programs to enhance a neighborhood resource that brings the world of biodiversity to Greater Boston.”

Friedman is the author or co-author of more than 50 peer-reviewed publications, and serves on editorial committees for the American Journal of Botany, the International Journal of Plant Sciences, the Journal of Plant Research, and Biological Reviews. He is a member of the Botanical Society of America.

Friedman received a bachelor’s degree in biology from Oberlin College in 1981, and a doctorate in botany from the University of California, Berkeley, in 1986. He is a fellow of the Linnean Society of London, and a 2004 recipient of the Jeanette Siron Pelton Award, granted by the Conservation and Research Foundation through the Botanical Society of America. In 1991, he received the Presidential Young Investigator Award from the National Science Foundation. Friedman spent his early career in the Botany Department at the University of Georgia before joining the faculty at the University of Colorado.