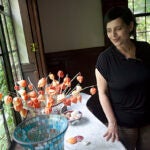 The soaring sounds of music

How 1500s art reflected rapid change across many fields

Earlier this year, Harvard cultural historian Katharine Park sat in a hotel room in Rome, with an intellectual puzzle in front of her.

It was a sheaf of 16th century allegorical prints, representations of the liberal arts that were mostly embodied in the female form. (“Art” in Latin, after all, is the feminine “Ars.”)

At first, the pictures all seemed to be “ladies in flowing robes, holding stuff,” said Park in a lecture Wednesday (Sept. 15). “It was like a crossword puzzle.”

It was a puzzle with a purpose. Susan Dackerman had given Park the prints, along with a challenge: Find a theme, then write a catalog essay for a 2011 Harvard Art Museums exhibition, “Prints and the Pursuit of Knowledge.”

Dackerman is Carl A. Weyerhaeuser Curator of Prints at the Fogg Art Museum. Her idea for the exhibit goes back to 2005, her first year at Harvard. Park, who is Harvard’s Samuel Zemurray Jr. and Doris Zemurray Stone Radcliffe Professor of the History of Science, was used to parsing images, but she is used to choosing her own. (Among other things, Park is an authority on medieval dissection practices.)

But she was also committed to the idea of the exhibition, which Dackerman said is intended to explore “the intersection of art and science in the 16th century.” It was an age in which noted artists such as Albrecht Dürer and Pieter Brueghel aided “new knowledge formation,” when art helped put scientific innovation on display.

New fields were emerging, including astronomy, cartography, botany, geography, and anatomy. So why not capture that era with an exhibition of prints, books, maps, and scientific instruments? (The fall 2011 exhibit will also showcase graduate student writing, as well as support interdisciplinary faculty lectures in science, art, history, and literature.)

The idea of the exhibition also inspired an ongoing humanities lecture series, whose 2010-11 season started with Park’s lecture this week. “Allegories of Knowledge: Prints, Instruments, and Practical Mathematics, 1500-1600” is substantially what she wrote in Rome for the catalog essay.

To answer the puzzle of the prints, Park focused on allegorical personifications of the liberal arts from Netherlands and southern Germany. Specifically, she looked at representations of the quadrivium, which is made up of the four mathematical subjects — arithmetic, geometry, music, and astronomy — taught at medieval universities. Traditionally, they followed the bedrock verbal arts of the trivium, made up of grammar, logic, and rhetoric.

Sometimes the personifications that Park chose were clear juxtapositions of science and allegory, as in Cornelis Anthoniszoon’s 1544 woodcut of Amsterdam. Its bird’s-eye view of canals, housing, and fortifications showed contemporary techniques of mapping. But in the right-hand corner, separated by stylized clouds, it included an allegory of the harbor city, in an outsized figure reminiscent of Neptune.

The science and allegory “depict the same understanding of the city’s identity,” said Park, “as inseparable from the sea.”

Beyond such “rudimentary and widespread” forms of personification, she said, were “more elaborate allegorical images” crowded with figures, objects, and activities meant to illustrate concepts, such as the five senses, or the seven planets, or the four continents as they were understood back then.

Adriaen Collaert’s “America” (c. 1588-89) shows a nearly naked native woman astride an armadillo, holding examples of the martial arts associated with the New World, a battle ax and a bow and arrow. In the background, cannibals roast a human haunch, as exotic fauna graze.

The juxtaposition of European art and New World artlessness is more explicit in another Collaert engraving, also called “America.” In it, the explorer and mapmaker Amerigo Vespucci, fully clothed and properly outfitted, surprises a native American woman, who is ????naked and devoid of any attributes but her hammock,” said Park.

Vespucci holds a mariner’s astrolabe, a symbol of European technical accomplishment. Behind him, a sturdy ship rides on the sea. Behind the woman, only exotic nature is on display, along with a crude spear and another cannibal feast.

Europe, through its art, reveled in a technical superiority over recumbent nature, as personified by America. But it also came to feel superior to its own intellectual ancestors, said Park, as part of an “allegory of progress, whereby America recalls Europe’s primitive past.”

Central to Park’s demonstration of this transition from the classical world to the modern is “Nova reperta” (“New Discoveries”), a print from the 1590s by Flemish designer and painter Joannes Stradanus. It portrays nine inventions or discoveries, beginning with the “discovery” of America and proceeding to Number 9, stirrups. In the left background, a vigorous young man enters, pointing confidently. To the right, an old man exits.

By the mid-to-late 16th century, said Park, “Europeans began to assimilate the fact that their increasing geographical and technical knowledge had surpassed that of the classical world.”

She quoted physician Girolamo Cardano, who wrote in his contemporary autobiography: “Among natural prodigies, the first and rarest is that I was born in this century when the Earth was discovered, whereas the ancients hardly knew a third of it.”

The invention of printing, he added, “can rival divine miracles.”

Among other things, said Park, the 16th century elevated the “mathematical and mechanical arts,” which traditionally had been regarded as inferior to theoretical sciences. They were, she said, “ennobled by their practical utility.”

The “New Discoveries” print reflected what Park called the century’s “three epistemic revolutions,” that is, the ascendancy of practical mathematics, of the mechanical arts, and of the skills associated with discovery and colonization. These might be summed up in Vespucci’s astrolabe, sword, and proud ship bobbing in the waves.

The allegorical imagery of the 16th and early 17th centuries “reflects rapid changes in contemporary science and technology,” said Park. These changes depended on a new set of “middle sciences” that brought mathematics into the material realm, including navigation, cartography, ballistics, surveying, and architecture.

Park showed one vivid example of how traditional allegorical representations gave way to new ones.

German printmaker Virgil Solis (1514-1562) “personified the liberal arts as supra-mundane goddesses,” said Park, “surrounded by clouds and unencumbered by their traditional tools.” She showed his engraving of the figure Geometry — “Geomatria” — floating in puffs of cumulus, far above the mundane world of fortifications and walled towns.

But German engraver Hans Sebald Beham, a contemporary of Solis, portrayed Geometry (now “Geometria”) as a solid, plain inhabitant of a workshop. She holds the tools of her practical trade, including an ell, a plumb line, and a square. This Geometry, one of the “sturdy and muscular practitioners” of Beham’s quadrivium series, said Park, floats above nothing. She grasps her tools, ready to transform the material world.

Practical tools of the time, including an astrolabe, will be part of the 2011 exhibit. They were demonstrated after Park’s talk by Sara Schechner, Harvard’s David P. Wheatland Curator of the Collection of Historical Scientific Instruments.

During her lecture, Park also included a print that seems to eerily prefigure the way modern technology sometimes seems to overwhelm the senses and capabilities.

In Dürer’s “Melencolia I,” from 1514, the figure of Melancholy sits slumped in the foreground, “overwhelmed by a welter of tools and objects,” said Park, “most of them associated with the rapidly ramifying middle sciences of weights, timekeeping, acoustics, architecture” and other emerging practical arts.

Park ended on a brighter note, with the idea that these new mathematical and mechanical arts gave humankind a “license for creative diversity” and a “sense of freedom and empowerment.”

She recalled the two figures in “New Discoveries” — the young man and the old one — which personified one view of the inventive, daring 16th century. “Time has been reborn,” she said, “as an energetic youth presiding over the products of human ingenuity.”