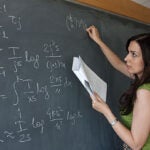 It all adds up

“This work by Derrick Rossi and his colleagues solves one of the major challenges we face in trying to use a patient’s own cells to treat their disease,” said Melton, who is also co-chair of Harvard’s Department of Stem Cell and Regenerative Biology. “I predict that this technique will immediately become the preferred method to make iPS cells from patients, and, indeed, at the HSCI we are turning our entire iPS core to using this method,” said Melton, who did not participate in the work.

The findings were published online by the journal Cell Stem Cell.

Rossi’s group, based at the Immune Disease Institute, at Children’s Hospital Boston, used synthetic mRNA to reprogram adult human skin cells, called fibroblasts, turning them into cells that are apparently identical to human embryonic stem cells, the initial building blocks of the body’s organs. They then used other mRNA to program the new cells, which they are calling RiPS (RNA-iPS) cells, to develop into specific cell types. In the current study, they created muscle cells.

Because mRNA carries genetic instructions but does not enter the DNA of the target cells, the resulting tailored cells should be safe to use in treating patients, Rossi said, unlike the iPS cells now being created around the world.

“The new report provides a substantial advance,” National Institutes of Health director Francis S. Collins told The Washington Post. “But this research in no way reduces the importance of comparing the resulting iPS cells to human embryonic stem cells. Previous research has shown that iPS cells retain some memory of their tissue of origin, which may have important implications for their use in therapeutics. To explore these important potential differences, iPS research must continue to be conducted side by side with human embryonic cell research.”

“Our findings address three major impediments to clinical translational use of iPS cells,” Rossi said in an interview. “The method does not in any way breach genomic integrity, as it does not necessitate integrating genes or viruses into the target cells’ DNA; it is orders of magnitude more efficient at producing iPS cells than conventional iPS methods, which were notoriously inefficient; and it gives us a way to directly program and direct the development of the iPS cells toward clinically useful cell types.”

The three problems the Rossi group indeed appears to have solved in one fell swoop are those with which stem cell biologists have been wrestling ever since Japanese researcher Shinya Yamanaka announced in 2006 that he had used four genes to convert fully developed adult skin cells into ones with all of the properties of embryonic stem cells. Those cells, which Yamanaka dubbed induced pluripotent stem cells, could, like embryonic stem cells, theoretically be directed to become any human cell type.

But Yamanaka used viruses to insert the genes into the genome of the target cells, and that created at least two major impediments to using the iPS cells to treat human disease, which is the main goal of stem cell researchers.

First, the use of the integrating viruses raised the real possibility that cancers might inadvertently be triggered. Second, inserting the genes into the genome could lead to changes that would alter the properties of the resulting iPS cells so they would not be identical to human embryonic stem cells.

Ever since Yamanaka’s discovery, scientists have been looking for other ways to turn adult cells into iPS cells, both to study diseases by creating cell lines carrying the genes of diseased patients, and to create patient-specific cell lines to treat individual patients. Now, with Rossi’s RiPS cells, they may have found what they’ve been seeking.

The Washington Post reported Wednesday that Yamanaka stated in an email he plans to try Rossi’s technique, and said “the standard method to generate [iPS cells] for clinical applications has yet to be established. I think this method has the potential for it.”

“Most approaches for generating iPS cells involve some sort of integration into the genome, usually viral,” Rossi said, “so clearly the development of a technology that does not breach genomic integrity is very important. Gene therapy trials unfortunately taught us the danger in leaving viruses in the genome, as some patients developed cancers that were driven by the integrated viruses. So when one thinks about strategies for regenerative medicine, you need to envisage utilizing cells whose genome has not been breached. We believe that utilizing RNA to generate transplantable cells and tissues is an ideal solution because, to the best of our knowledge, RNA is completely nonintegrative.”

Rossi and his team created mRNA that carries the instruction sets from the four genes used by Yamanaka. So the mRNA tells the adult cells to reprogram, just as the Yamanaka genes do, but it does so without disturbing the integrity of the adult cell’s genome. The resulting RiPS cells may be more identical to human embryonic stem cells because their genomic integrity is maintained. When Rossi and colleagues compared the RiPS cells they made to human embryonic stem cells, they found a much closer match than when iPS cells were generated with viruses.

Next comes the question of how to turn the RiPS cells, cellular blank slates, into the kind of cells that researchers need to treat patients — for example, the insulin-producing beta cells destroyed in diabetics, or the motor neurons that degenerate in the brains of patients with Parkinson’s.

Here again Rossi and his team turned to mRNA. “Up to this point, it’s been extremely difficult to direct cells to differentiate towards particular fates, or cell types,” Rossi said. Current methods for directing cellular differentiation usually rely on tightly controlling the environment in which the cells are developing, tailoring the growth media and other factors to coax the iPS cells to develop into a particular cell type. “We thought to use mRNA encoding … factors in order to drive the fate of iPS cells to the desired cell fate. We are beginning to know more about what factors are needed to create certain types of cells. A great example was the demonstration by Doug Melton’s group that they could use just three specific factors to turn adult pancreatic exocrine cells into insulin-producing beta cells.”

But those experiments again required the insertion of gene-carrying viruses into the target cells, said Rossi. To demonstrate that mRNA might be used to direct iPS cell fate, Rossi and his colleagues synthesized mRNA with the instruction set for making muscle cells, and showed that they could use this method to efficiently drive the fate of RiPS to muscle cells, without compromising the genome of these cells. “These results provide us with a new experimental paradigm that might safely be used in regenerative medicine,” Rossi said.

Rossi’s group also reported it has found a method that is far more efficient than previous ones in producing iPS cells.

“Up until now, iPS cell generation has been an extremely inefficient process,” Rossi said. “Our technique allows for iPS generation that’s significantly more efficient than conventional approaches.” It used to be that only 0.001 to 0.01 of starting cells could be reprogrammed to iPS cells. The study by Rossi and his colleagues, however, reported iPS conversion efficiencies in the range of 1 to 4 percent of starting cells. What that means practically is that iPS cells can be generated even if few starting cells are used. This efficiency may prove important for patients from whom only a few starting cells can be obtained.

Another finding has implications far beyond stem cell science. The Rossi group reported that it found a way to overcome the natural cellular immunity to the insertion of foreign RNA.

“I am sure we’re not the only lab to have the idea of using RNA for cellular reprogramming,” said Rossi. “The problem is that when you introduce RNA into a cell, the cell thinks it is being infected by an RNA virus and retaliates by producing a massive interferon response that effectively shuts down cellular function and can prompt the cell to altruistic suicide as it tries to stop the ‘virus’ from replicating. In order to use RNA for cellular reprogramming, we clearly needed to overcome this problem,” he said. “Our approach was to modify the RNA so that it no longer set off antiviral responses when introduced into cells. The modified mRNA enabled us to efficiently express proteins in cells for days and weeks without causing any adverse reaction in the cells.”

“Although we developed this technology for cellular reprogramming, it actually has utility far beyond that,” said Rossi, who has patented the technology and is forming a company to develop it. “Basically our technology provides a means of transiently expressing any protein in a cell without eliciting the cell’s antiviral response pathways. This could have potential therapeutic benefit in patients suffering from protein deficiencies.”

This work was supported with funding from Rossi’s “startup package,” the money that newly hired faculty receive to establish their labs, and with a seed grant from the Harvard Stem Cell Institute.

Said Melton, “It’s wonderful to see that HSCI seed grant funds given to outstanding, innovative, and imaginative young scientists like Rossi can so quickly and dramatically change a field.”