Out of the studio, into the classroom 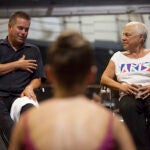 A master of motion

Artists become visiting faculty to share their experiences with students

Penelope Umbrico is a Brooklyn artist — a selective and deep-delving archivist of digital imagery — who explores search engines, picture sharing, and other Internet portals for her resonant creations.

In her work “5,537 Suns from Flickr (Partial),” for instance, Umbrico compiled 2,500 Internet snapshots of sunsets into a large-format work that enlisted clichés in the service of art.

Umbrico is among seven practitioners who are visiting faculty this year at Harvard’s Department of Visual and Environmental Studies (VES). The traditional program is designed to refresh the artists, energize faculty, and inspire eager students.

The public will have access too, through a series of “visiting faculty artist talks” that will take place on successive Thursdays beginning Sept. 23.

Teaching makes her own art richer, and is “really important to my practice,” said Umbrico, chair of photography at Bard College’s Milton Avery Graduate School of the Arts. Her classroom style “is more conversational,” she said. “I don’t lecture.”

Mungo Thomson will be at VES too. The Los Angeles artist (his first name is a legacy of his Scottish heritage) created a 2.5-minute video installation for “New Visiting Faculty 2010-2011,” an exhibit on view through Sept. 26 at the Carpenter Center for the Visual Arts.

A classroom veteran of West Coast universities, Thomson has had his share of teaching offers. “Sometimes you say no,” he said. “But I don’t know if you say no to Harvard.”

His wife, artist Kerry Tribe, a specialist in large-scale video installations, will also be at Harvard this semester. Teaching allows space for reflection and renewal, said the Cambridge native, who tripled her productivity earlier this year — and gave birth to her second child too. “It’s great to take a step back,” she said.

Five of the seven visiting artists will teach this fall. The other two, video and sound artist Marina Rosenfeld ’90-91 and Gregory Sholette, an installation artist and writer, will come aboard in January.

Matt Saunders ’97 and Katarina Burin, a couple who live in Berlin, are the only artists teaching both fall and spring. “I can’t imagine leaving after one semester,” said Burin, whose precise drawings are often inspired by architecture and the history it reveals.

As for teaching, “it actually invigorates your work,” said Burin, who taught last year in Italy. “It keeps you busy, moving. You have to find materials for your students. You learn from them.”

Most of the visiting artists talked about one sideline thrill of teaching at VES: being at the Carpenter Center. The five-level, cast-in-place concrete building, completed in 1963, is the only example in North America of work by the Swiss-born architect Le Corbusier.

“I like being here,” said Thomson, for “all the atmospherics.”

Umbrico plans to photograph and study the building she called “the epitome of utopian modernist architecture.”

Burin, a student of architectural forms, is already wide-eyed at teaching in a Le Corbusier space. “I love the simplicity and the cleanliness of this modern building,” she said. “I love the weirdness about it.”

Of the visiting faculty, only Saunders is new to teaching. “There is something to be said,” he offered, “for standing up and being forced to articulate what we are doing.”

Berlin is a heaven and a haven for artists, said Saunders, who moved there with Burin eight years ago. Artists herd like happy cats, and studio rents are as little as 100 euros ($128) a month. Though Berlin is “a vast, aging city with a horrible winter,” said Saunders, it is also a non-hierarchical refuge from the unquiet hurry of the art world. He has gotten used to using coal fires, doesn’t own an iPad, and relaxes by composing essays on art. “I missed English when I moved to Berlin,” said Saunders. “So I started writing.”

Trained as a painter, he is now exploring the intersection of painting and photography. His work at the VES exhibit started with exposing film through a completed painting. In the case of “Young Patrick McGoohan #4,” the effect is spooky, something like seeing the vintage TV star like the Shroud of Turin.

Thomson’s video installation flickered nearby. It’s a kaleidoscopic look at every Time magazine cover from 1923 to 2009, one cover per frame and a mind-zapping 30 frames per second. The rapid-fire compilation, said the artist, “doesn’t lend itself to much explanation.”

But the art world itself — how it is changing, and how to survive in it — is worth explaining to his students, he said.

In one course, Thomson will explore the digital age’s “post-studio studio.” In another, he will get right down to the details, including how to promote and document your own work, in “the kind of practical concerns,” he said, “that most art schools completely skip.”