Aftermath of a world at war 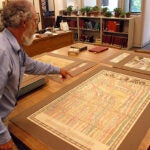 Off the beaten path

Consider Mama Louise, a woman from the Democratic Republic of the Congo, a country that in a decade of civil war has suffered 3 million dead. Two years ago, rogue fighters killed her husband before her eyes. Then she was raped, as were her 81-year-old mother and her three daughters.

Mama Louise was in a coma for 21 days, but emerged to start a new life counseling women hurt in similar ways.

Her story is one of many told in “Our World at War,” a traveling exhibit of photos on display through Oct. 14 at the Center for Government and International Studies (CGIS) South.

“We do a lot of data” about war and its aftermath, said emergency physician Michael VanRooyen, director of the Harvard Humanitarian Initiative (HHI), which sponsored the exhibit. “But nothing can quite capture it like images.”

The images in the show, which are presented on handsome panels and accompanied by tersely stunning text, are powerful. The International Committee of the Red Cross (ICRC) commissioned five award-winning photojournalists from the VII Photo Agency to document the aftermath of recent conflicts. (Funding also came from the Newseum in Washington, D.C.)

The photojournalists went to the nation of Georgia, where Antonin Kratochvil documented the little-known penumbra of the 2008 war with Russia.

Franco Pagetti visited scenes of rebel fighting in Colombia. In Lebanon, one of his subjects was Hasniyye Yehia Tawiyyeh, who lost her husband and son after the 2006 Israeli invasion. Her stark, stolid portrait, “Loss Upon Loss,” is in the exhibit. “She let me get into her soul,” said Pagetti.

His voice, and those of other photographers, is part of the exhibit’s looped video, which is itself a kaleidoscope of powerful images.

James Nachtwey traveled to the Philippines, where in Mindanao rebels broke a ceasefire in 2008, sending 250,000 peasants fleeing into the countryside. They remain there, haunted and poor.

Another of Nachtwey’s photos, from Afghanistan, shows an ICRC specialist in orthopedics bracing a bearded man who is propped upright on two new artificial legs.

Christopher Morris went to Liberia, a country that until 2003 was rent by 14 years of civil war. The scars remain, he said, including endemic rape, child abandonment, displaced villagers, and the legacy of child soldiers.

One of his images is of Liberian boys playing amputee football — soccer on a barren field. Most of the players are on crutches, one with a single, footless leg dangling. Another player, shoulders hunched, hops toward the ball on a prosthetic.

Ron Haviv, a veteran war photojournalist, traveled to Haiti. One of his images shows a food stall in the shantytown of Cité Soleil. For sale were mud cakes mixed with salt and butter, all the “food” that some could afford on earnings of less than a dollar a day.

For years, Cité Soleil had been a free-fire zone for rival gangs. One day, Roudeline Lamy was caught in the crossfire. Haviv photographed the young mother on the concrete floor of her shack. Next to her was her 3-year-old daughter, naked and paralyzed from the waist down. She was dropped the moment her mother was shot in the stomach.

Haviv traveled to the Democratic Republic of the Congo, where he met and photographed Mama Louise. Her face in the portrait is squeezed into the lower right-hand corner of the frame. All that shows is one haunted eye. Louise now counsels other women, “with an amazing resilience I find almost impossible to understand,” said Haviv, who was at the Harvard opening Sept. 9. “Every day, she relives her own trauma through the lives of others.”

There’s still a role for photojournalism, he said, even in a world awash in images of horror that sometimes suffers from charity fatigue. Images such as those in the exhibit, said Haviv, have the power to influence minds, to change the lives of their subjects, and to remind viewers of the world’s most unpleasant realities.

“It is high art to bring a reality here,” said physician and disaster-relief veteran Jennifer Leaning, director of Harvard’s François-Xavier Bagnoud Center for Health and Human Rights. Returning from chaotic and violent parts of the world, she said, “We try to tell the story,” but “there’s something about photojournalism that does it better.”

The images in the exhibit are disturbing, said Deborah Jackson, CEO of American Red Cross of Massachusetts Bay, “but they are important. They remind us you just can’t forget.”

Still, why war photos at Harvard? The academic environment “is an extremely important place to have this work,” said Haviv, now entering his 21st year as a photographer. For one, he said, the show can reach the minds and hearts of those who some day will go out and change the world.

Links between academe and disaster-relief practitioners such as the ICRC are strong now, said Leaning, a former co-director of HHI, “and we are interested in stronger linkages.”

That includes offering academic events related to the photo exhibit. HHI will host a panel called “Drawing a Distinction Between Civilians and Combatants” on Sept. 22 from 5 to 7 p.m. at the Tsai Auditorium.

Early next month at Tufts University, HHI will co-sponsor a three-day international conference on “crisis mapping,” an emergent pursuit that melds technology and human rights.

HHI also will co-sponsor a panel called “Depicting Conflict: The Role of the Photojournalist,” on Oct. 14 from 5 to 7 p.m. in the CGIS Belfer Case Study Room.