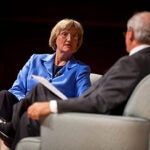 The students at the John D. O’Bryant School of Mathematics and Science in Boston seemed like old friends with their counterparts from the Paradise Valley Unified School District in Arizona, the way they compared notes on the rigorousness of their course loads and talked about social media.

But the students had never met before. Indeed, they weren’t even in the same room. Instead, they viewed each other from 2,600 miles apart Wednesday (Sept. 22) on a high-definition screen, and talked in real time via a special Internet connection, thanks to a new partnership with Harvard and a special gift from Cisco Systems Inc.

“This is really high-end technology,” said Nia Richardson, 17, an O’Bryant senior. “Knowing that we can communicate with classes in China or around the country is really exciting.”

Harvard President Drew Faust, Boston Mayor Thomas M. Menino, Boston Public Schools Superintendent Carol Johnson, and Cisco Vice President Ken Gaines joined the O’Bryant and Paradise Valley students to kick off a new partnership designed to bring the world to local classrooms. Using an Internet2 connection donated by Harvard and speaking on TelePresence equipment donated by Cisco, the group also “met” with Cambridge Superintendent Jeff Young and Dean Kathleen McCartney of the Harvard Graduate School of Education to celebrate the launch of this partnership on both sides of the Charles River.

“I am so grateful to our friends at Cisco and Harvard for bringing the world to our students through this very cutting-edge technology,” Menino said.

As part of this partnership, Harvard has agreed to share its access to the high-speed Internet2 connection with all 148 public schools in Boston and Cambridge. Internet2 is the most advanced networking consortium in the country, providing superfast connections to a broad range of the education sector, including universities, libraries, and museums.

The partnership is just the latest example of how Harvard and Boston have come together over 375 years to address challenges and strengthen communities, Faust said. A new report, also released Wednesday, details for the first time the extent of the University’s educational engagements with Boston’s schools and students. Called “Partnerships for Progress,” the report catalogs 123 educational programs that Harvard now conducts in Boston, and provides an in-depth look at key initiatives.

“We see this as moving into the future with a new kind of partnership with technologies that those folks 375 years ago could never have imagined,” Faust told the students. “We now, together, will have new ways of imagining what this technology can mean.”

In addition to providing the Internet2 access, Faust announced that Harvard will convene an advisory group that will identify opportunities to use these new technology resources to further strengthen the University’s existing partnerships with Boston and Cambridge.

“This technology opens a list of possibilities that are unparalleled,” Young agreed.