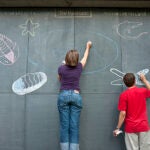 More than three dozen Harvard graduates will join the ranks of Teach for America this fall, making the University among the nation’s top contributors to the national nonprofit education program.

Thirty-eight Harvard graduates joined Teach for America this year, committing to work for two years in underserved schools and become leaders in the pursuit of educational equity. They will be part of a corps of more than 8,200 members who will teach in 39 regions across the country.

Admission to the program this year was even more selective than previously, with a record 46,000 applicants and a 12 percent acceptance rate. Eighteen percent of Harvard’s 2010 graduating class applied to the program last year — the largest percentage of any school or class in the history of the organization.

Teach for America recruits applicants from all academic majors and backgrounds, focusing on those who have demonstrated outstanding achievement, perseverance, and leadership.

The large number of applicants from Harvard was used as an example in President Drew Faust’s 2010 Commencement address, as she underscored the University’s mission to serve the common good. Harvard has been on the top 10 list of contributors for universities of its size since Teach for America started compiling such figures in 2008.

In 2009, 55 graduating seniors joined the teaching corps, and 33 the year before.