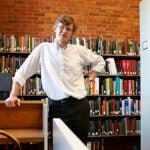 A team of Harvard physicists led by Mikhail D. Lukin has achieved the first-ever quantum entanglement of photons and solid-state materials.  The work marks a key advance toward practical quantum networks, as the first experimental demonstration of a means by which solid-state quantum bits, or “qubits,” can communicate with one another over long distances.

Quantum networking applications such as long-distance communication and distributed computing would require the nodes that process and store quantum data in qubits to be connected to one another by entanglement, a state where two different atoms become indelibly linked such that one inherits the properties of the other.

“In quantum computing and quantum communication, a big question has been whether or how it would be possible to actually connect qubits, separated by long distances, to one another,” says Lukin, professor of physics at Harvard and co-author of a paper describing the work in this week’s issue of the journal Nature.  “Demonstration of quantum entanglement between a solid-state material and photons is an important advance toward linking qubits together into a quantum network.”

Quantum entanglement has previously been demonstrated only with photons and individual ions or atoms.

“Our work takes this one step further, showing how one can engineer and control the interaction between individual photons and matter in a solid-state material,” says first author Emre Togan, a graduate student in physics at Harvard.  “What’s more, we show that the photons can be imprinted with the information stored in a qubit.”

Quantum entanglement, famously termed “spooky action at a distance” by a skeptical Albert Einstein, is a fundamental property of quantum mechanics.  It allows one to distribute quantum information over tens of thousands of kilometers, limited only by how fast and how far members of the entangled pair can propagate in space.

The new result builds upon earlier work by Lukin’s group to use single atom impurities in diamonds as qubits.  Lukin and colleagues have previously shown that these impurities can be controlled by focusing laser light on a diamond lattice flaw where nitrogen replaces an atom of carbon.  That previous work showed that the so-called spin degrees of freedom of these impurities make excellent quantum memory.

Lukin and his co-authors now say that these impurities are also remarkable because, when excited with a sequence of finely tuned microwave and laser pulses, they can emit photons one at a time, such that photons are entangled with quantum memory.  Such a stream of single photons can be used for secure transmission of information.

“Since photons are the fastest carriers of quantum information, and spin memory can robustly store quantum information for relatively long periods of time, entangled spin-photon pairs are ideal for the realization of quantum networks,” Lukin says.  “Such a network, a quantum analog to the conventional internet, could allow for absolutely secure communication over long distances.”

Lukin and Togan’s co-authors on the Nature paper are Yiwen Chu, Alexei Trifonov, Jeronimo Maze, and Alexander S. Zibrov, all at Harvard; Liang Jiang of Harvard and the California Institute of Technology; Lilian I. Childress of Harvard and Bates College; M.V. Gurudev Dutt of Harvard and the University of Pittsburgh; A.S. Sorensen at the University of Copenhagen; and Phillip R. Hemmer of Texas A&M University.  The work was supported by the Defense Advanced Research Projects Agency, the Harvard-MIT Center for Ultracold Atoms, the National Science Foundation, the National Defense Science & Engineering Graduate Fellowship, and the Packard Foundation.