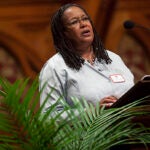 Harvard University began welcoming new students and their families Thursday (Aug. 26), with the first move-in day signifying the beginning of the fall semester and a new academic year.

The newcomers were helped in acclimating to their environment by peer advisers — upperclassmen who volunteer to provide academic and social mentoring.  This group can easily be spotted around Harvard Yard wearing bright orange T-shirts that read “Finding Freshman.”

Anika Petach ’13 is a peer adviser for Matthews Hall. She describes her role as “being there as a steppingstone for freshmen, with any questions they have so that they can get the resources that they need. It’s a friendly way for them to get information.”  Peer advisers also offer a student perspective about classes and other aspects of life on campus.

The Gu family was greeted by Harvard College Dean Evelynn Hammonds after they finished moving their daughter Catherine into Thayer Hall from New Jersey. Yancui Gu was impressed with how organized the move-in was and how helpful people were in assisting. “The room is nice, and there is a big common room,” said Catherine. Her biggest concern was the bathroom, because, as she said, “I really don’t know how this is going to work with a hall full of girls and only two showers.”

Terrance Moore and his father Melvin traveled from Atlanta to move in Terrance. Terrance said of the traffic-clogged streets that, “we were not ready for that” but his dad said, “We are from Atlanta, I promise you this traffic is nothing. We had no problems and I have no complaints. Everything was done just right.” They said this is an exciting time for each of them. Terrance is looking forward to “meeting all the extraordinary people at Harvard” and the football season.”  Melvin said of his son, “I hope that he makes us all proud with whatever he does. I’m proud of him getting here.”

Jimmy McCune and his mother Sharon had an easy commute, coming from nearby Somerville. The most challenging part of the move for them was the 20-minute time limit to get everything from the car upstairs to Jimmy’s room. Jimmy said he approached move-in day with an “expect the unexpected” attitude, and it had gone better than expected.