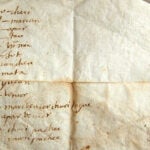 A glimpse of lost language

Blame it on the heat wave.

Last year’s season-opening production at the American Repertory Theater (A.R.T.) was the smash disco hit “The Donkey Show,” which was so popular it’s still running. Now on the heels of a sizzling summer, the A.R.T. is back with sexy season starter “Cabaret” and an intriguing fall lineup.

“Cabaret,” which debuts Aug. 31, comes with a disclaimer: The production is recommended for people 16 and older, unless accompanied by an adult. If disclaimers are any indication, the A.R.T. stage will be cooking all season long.

“Our aim and mission is to empower the audience, making them part of the experience and to give them a sense of ownership and a feeling of importance in the theatrical event,” explained Katalin Mitchell, the A.R.T.’s director of press and public relations.

“This season we are investigating work that is driven by music, both from the established canon and with world premieres of new work that will take us from Weimar Germany to a future in which robots discuss the meaning of death. It will also delve into the classics with a series of plays from the classic Greek canon that speak directly to our lives today, with questions of civic responsibility when faced with the trauma of war.”

In mid-September, A.R.T.-goers can look forward to an even more psychedelic adaptation of the offbeat “Alice in Wonderland,” ominously titled “Alice vs. Wonderland.” Billed as “Lewis Carroll meets Lady Gaga,” this updated adaptation of the classic coming-of-age tale is the vision of acclaimed Hungarian filmmaker and director János Szász. This production stars the A.R.T. Institute Class of 2011 and runs for five performances only (with matinee and evening shows on all but one date).

But what would “Alice vs. Wonderland” be without a tea party? The A.R.T. hosts a special celebration on Sept. 25 that’s free with a ticket.

The A.R.T. kicks off winter with “The Blue Flower,” which blends Weimar cabaret and country-western music, goes from Belle Epoque Paris to the battlefields of World War I, and centers on four friends and lovers trying to make their way through a world in pieces.

“R. Buckminster Fuller: The History (And Mystery) of the Universe ” tops 2011 and is based on the life, work, and writings of Richard Buckminster “Bucky” Fuller, the “Leonardo da Vinci of the 20th century,” who was born in nearby Milton, Mass. Fuller was a futurist who coined the term “Spaceship Earth,” among others, and designed the geodesic dome.

February is for world premieres. Obie Award-winning Sarah Benson directs “Ajax,” which opens in mid-month and is the debut of a new translation of Sophocles’ famous work. Later in the month, A.R.T. artistic director Diane Paulus directs the never-before-seen production of “Prometheus Bound,” which “immerses the audience in an environment that has the Dionysian energy and rebelliousness of a rock concert.”

Written by Tony- and Grammy Award-winning lyricist and playwright Steven Sater, the music of “Prometheus Bound” was composed by System of a Down lead singer Serj Tankian.

Rounding out the season in mid-March is “Death and the Powers: The Robots’ Opera,” which employs unique technology, developed at the MIT Media Lab —including a chorus of robots, animated stage, and a musical chandelier. Former national poet laureate Robert Pinsky, who co-authored the story with Randy Weiner, wrote the libretto. Paulus directs this inventive debut, which will be staged at the Cutler Majestic Theater at Emerson College.

“Our 2010-11 season exemplifies what our artistic director Diane Paulus has made her mission at the A.R.T.,” said Mitchell, “which is to bring innovative and buzz-generating theater to Boston and to draw a younger and more diverse audience to our productions.”