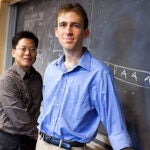 Harvard researchers have uncovered a mechanism in mice through which caloric restriction and exercise delay some of the debilitating effects of aging by rejuvenating the connections between nerves and the muscles that they control.

The research, published online by the journal Proceedings of the National Academy of Sciences, was conducted in the labs of Joshua Sanes and Jeff Lichtman, both members of the Center for Brain Science at Harvard and professors of molecular and cellular biology.  Their findings begin to explain prior findings that exercise and restricted-calorie diets help to stave off the mental and physical degeneration of aging.

Sanes said their research, conducted through laboratory mice genetically engineered so their nerve cells glow in fluorescent colors, shows that some of the debilitation of aging is caused by the deterioration of connections that nerves make with the muscles they control, structures called neuromuscular junctions.  These microscopic links are remarkably similar to the synapses that connect neurons to form information-processing circuits in the brain.

In a healthy neuromuscular synapse, nerve endings and their receptors on muscle fibers are almost a perfect match, like two hands placed together, finger to finger, palm to palm.  This lineup ensures maximum efficiency in transmitting the nerve’s signal from the brain to the muscle, which is what makes it contract during movement.

As people age, however, the neuromuscular synapses can deteriorate in several ways.  Nerves can shrink, failing to cover the muscle’s receptors completely.  Sanes said the intersections between the nerves and muscles can go from a continuous network that looks like a pretzel to one that resembles a bunch of beads — broken into discontinuous individual lumps, interfering with transmission of nerve impulses to the muscles.  This loss of activity can result in wasting and eventually even death of muscle fibers.

The work showed that mice on a restricted-calorie diet largely avoid that age-related deterioration of their neuromuscular junctions, while those on a one-month exercise regimen when already elderly partially reverse the damage.

“With calorie restriction, we saw reversal of all of these things.  With exercise, we saw a reversal of most, but not all,” Sanes said.

Because of the study’s structure — mice were on calorie-restricted diets for their whole lives, while those that exercised did so for just the month late in life — Sanes cautioned against drawing conclusions about the effectiveness of exercise versus calorie restriction in preventing or reversing synaptic damage.  He noted that longer periods of exercise might have more profound effects, a possibility he and Lichtman are now testing.

Though much of the work in the Sanes and Lichtman labs focuses on understanding synapses in the brain, both scientists have investigated neuromuscular synapses for many years because they are far easier to study than brain synapses.  Neuromuscular junctions are large enough to be viewed by light microscopy, and can be a jumping-off point for brain study, highlighting areas of inquiry and potential techniques.

“There have been quite a few reports that caloric restriction and exercise delay cognitive decline, but people don’t know much about the cellular reasons behind them,” Sanes said.  “These findings in neuromuscular synapses make us curious to know whether similar effects might occur in brain synapses.”

Beyond the ease of study, neuromuscular junctions are important areas to understand because the gradual loss of muscle mass and strength, known to scientists as sarcopenia, is a problem in the elderly, debilitating otherwise healthy individuals who can lose their balance and break a hip or other bones, leading to a cascade of physical ills.

“The effects of exercise and caloric restriction on innervation may help explain their beneficial effects on sarcopenia,” Sanes said.

Lichtman and Sanes have been collaborating to study age-related changes in synapses for five years and began focusing on caloric restriction and exercise two years ago.

While the changes to the synapses through caloric restriction and exercise were clear in the images the researchers obtained, Sanes cautioned that their work was structural, not functional, and they have not yet tested how well the synapses worked.

Sanes said the research may help to advance research aimed at increasing the time that people spend healthy, termed “healthspan.”

“Caloric restriction and exercise have numerous, dramatic effects on our mental acuity and motor ability,” Sanes said. The research “gives us a hint that the way these extremely powerful lifestyle factors act is by attenuating or reversing the decline in our synapses.”