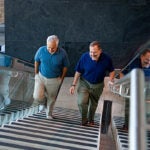 Expectant mothers who gain large amounts of weight tend to give birth to heavier infants who are at higher risk for obesity later in life. But it’s never been proven that this tendency results from the weight gain itself, rather than genetic or other factors that mother and baby share. A large population-based study from Harvard researchers at Children’s Hospital Boston, looking at two or more pregnancies in the same mother, now provides evidence that excess maternal weight gain is a strong, independent predictor of high birth weight.

The study, published Online First in the British medical journal, The Lancet, highlights the importance of weight management efforts even before birth.

“Since high birth weight, in turn, increases risk for obesity and diseases such as cancer and asthma later in life, these findings have important implications to general public health,” says co-author David Ludwig, MD, PhD, a Harvard Medical School associate professor of pediatrics and director of the Optimal Weight for Life (OWL) Program at Children’s Hospital Boston. “It’s appropriate for a baby to be born with some fat, but a baby born too fat indicates that the fetus developed in an abnormal environment during the most critical nine months of life.”

Ludwig and collaborator Janet Currie, PhD, of the Department of Economics at Columbia University, used statewide birth records to examine all known singleton births in Michigan and New Jersey from 1989 through 2003. They identified mothers with two or more live births, allowing a comparison of pregnancies in the same mother. Infants born before 37 weeks or after 41 weeks of gestation were excluded, as were mothers with diabetes and infants with extremely low or high birth weights. This left 513,501 women and 1,164,750 infants for analysis.

On average, the women gained an average of 30 pounds during their pregnancies, but with much variation; 12 percent of pregnancies involved weight gains of more than 44 pounds. High-birth-weight babies (8.8 lbs or more) accounted for 12 percent of all births.

“When comparing between siblings to control for genetic influences, we found that increasing amounts of maternal weight gain led to the birth of progressively heavier infants,” says Ludwig.

Compared to those gaining just 18-22 pounds, expectant mothers gaining 44-49 pounds were 1.7 times more likely to have a high-birth-weight baby, and those gaining more than 53 pounds were 2.3 times more likely to do so. The pattern was the same after excluding women who had ever smoked, those who delivered by caesarean section, and those who had any pregnancy of less than 39 weeks or more than 40
weeks.

Animal studies suggest that excess maternal weight or excess weight gain during pregnancy affects the uterine environment, producing changes in the hypothalamus, pancreatic islet cells, fat tissue and other systems
that regulate body weight. “Hormones and metabolic pathways, and even the structure of tissues and organs that play a role in body weight maintenance are affected,” says Ludwig.

Recently updated guidelines from the Institute of Medicine suggest that women gain 28 to 40 pounds if underweight at the start of pregnancy, 25 to 35 pounds if they are normal weight, 15 to 25 pounds if overweight, and 11 to 20 pounds if obese.

The study was funded by the National Institutes of Health.