A picnic in the Yard 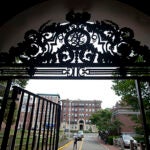 There was plenty of singing and dancing despite the heat Wednesday (Aug. 4) as Harvard hosted hundreds of older Cambridge residents at the 35th Annual Senior Picnic at Tercentenary Theatre.
The picnic brings seniors to Harvard Yard for a day filled with food, music, raffles and socialization. This year’s theme revolved around “Summer in the City,” and the event was jointly sponsored by Harvard’s Office of the President and the Office of the Mayor of Cambridge.

Maher thanked his staff as well as Harvard’s for their work in orchestrating the picnic. He gave special recognition to students from the Mayor’s Summer Youth Employment Program, who volunteered their assistance.

Ken Reeves, who served three terms as Cambridge’s mayor, also attended. He walked around, enthusiastically greeting and shaking hands with the picnickers. “This really is a special event, started by Al Vellucci. He started a great tradition, and he should always be celebrated,” said Reeves. “The seniors love to come to this event.”

Music and entertainment were provided by DJ Jimmy C from 2TheMax Entertainment, and guests also were treated to smooth sounds from Andy Bear and the Mood Swingers. The Cambridge Senior Center Chorus led the crowd in singing “Let There Be Peace on Earth,” in honor of those who have served or are still serving their country.

Cambridge resident Marguerite Wiggins has been attending the picnic for more than 20 years and looks forward to it annually. Although the heat kept her from dancing as she has previously, she still enjoyed the music while sitting in the shade. “It’s one of the events where you get to see people you don’t see all year,” she said. “It’s great to come and socialize with the neighbors, and the food is always good.”