A man of endless curiosity 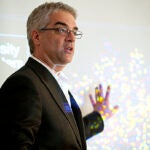 “I had trouble deciding what to do,” says postdoctoral fellow Emre Basar, sitting at a bench in Professor Judy Lieberman’s lab in Harvard Medical School’s Immune Disease Institute. Small wonder. Basar, who already obtained an M.D. and is now pursuing a Ph.D., acknowledges that he has been “interested in a lot of things, particularly medicine, engineering, and business.”

Born in Istanbul and educated at a French-bilingual school in Germany, Basar is fluent in German, French, English, and Turkish, and reads and writes Latin. Now he is seeking to understand how small interfering RNAs (siRNAs) can be harnessed as a drug against HIV and breast cancer. His global-minded, integrative approach to science, and life, is helping to build connections in research at Harvard and beyond.

Basar earned his M.D. from the Ruhr-University Bochum in Germany, finally deciding on medicine, he says, because it encompasses such a broad range of knowledge. “Medicine starts with biochemistry and physiology, but also includes clinical and practical components,” he says. “Not only do you have to know the pathobiology, you also have to interpret MR (magnetic resonance) images, know how to stitch the skin, and understand how to talk to a patient. Medicine has such a broad range of interactions and knowledge fields,” he says.

Basar’s decision to attend medical school was also strongly influenced by his father, a professor of civil engineering and computational mechanics who died in 2002. “My father was an outstanding scientist and teacher, who truly cared about people and used his education to better the lives of others,” Basar says. For Basar, a natural networker with a love for travel, medicine offered the opportunity to explore new worlds, both intellectually and physically, while following in his father’s footsteps by helping others.

Basar began his studies at Ruhr-University Bochum with a full stipend awarded by the German National Academic Foundation, which aims to build an interdisciplinary and international outlook among scholarship recipients.

During medical school, Basar had a number of clinical rotations and fellowships throughout the world. One of the most influential was a practical in a private hospital in Istanbul. “My first real insight into clinical experience was early on in my medical studies: I was working at the German Hospital in Istanbul when the city was hit by a huge earthquake. I think there were 20,000 people killed. And due to the chaos caused by the earthquake, I had to help,” says Basar. “I had the chance not only to assist, but to perform some surgery myself, which was exceptional after only one year at medical school.”

Basar was surprised by how much he enjoyed working in a clinical environment. “At the beginning of my medical studies I thought I would be more interested in biology or biochemistry. I didn’t think that I would like the clinical aspects as much, in particular the operations and having contact with patients,” he says. “But interestingly, I ended up enjoying this part the most.”

In addition to his time abroad in Turkey, Basar attended a training fellowship at Imperial College in London, had a medical clerkship at the Hochgebirgsklinik in Davos, Switzerland, and completed an internship in the Neurointensive Care Unit at Massachusetts General Hospital in Boston.

Basar enjoyed living in Boston so much that he returned to the city after completing his M.D. “I wanted to do biomedical research, and I knew that I would come back to Harvard to combine graduate studies with a postdoc. It had to be Harvard because the access to hospitals and the biotechnology industry surrounding Boston, you can’t beat,” Basar says. “Also, Boston is a very international city and I like that.”

In May 2005, Basar started a research fellowship at Brigham and Women’s Hospital (BWH), working to optimize an existing vaccine against anthrax. Although the vaccine component he tested proved to be inferior to the existing vaccine, Basar views the time as important to his career because he learned research techniques vital to biochemistry and immunology.

“I became more familiar with what research is,” Basar says. “During medical school, my focus was on surgery, so my research fellowship at the Brigham helped me develop research techniques and get a sense of what’s important in science and the emerging trends in the field,” he says. “It was during my time at BWH that I became very interested in RNA interference [RNAi] and its applications in translational research.”

Basar compares the current scientific interest in RNAi to the excitement caused by gene therapy two decades ago. “Craig Mello and Andrew Fire got the Nobel Prize for unveiling the mechanism of RNA interference, only eight years after their discovery. Normally, it takes decades to get a Nobel Prize; however, RNAi is an incredibly important technique: barely a decade after its discovery it has already revolutionized biomedical research.” Basar says.

According to Basar, both gene therapy and RNAi can be harnessed to regulate gene expression. While gene therapy targets the DNA in the nucleus of the cell, “RNAi affects the cell only at the messenger RNA level, which is more elegant and safer as the cell’s genomic information remains untouched,” he says.

Basar explains that genes are encoded in DNA and are then transcribed into messenger RNAs, which are in turn translated into proteins. Because proteins play a pivotal role in the regulation of all kinds of cellular processes, defects in their function or regulation can lead to disease. “In the case of AIDS, for instance, it is the immune cell receptors CD4 and CCR5 that are critical for HIV transmission,” Basar says. He explains that both CD4 and CCR5 are proteins that mediate binding of the virus to the cell membrane and hence enable HIV to penetrate and infect immune cells.

According to Basar, one way to induce RNAi is by introducing small interfering RNAs (siRNAs) into a cell. Once delivered into the cytoplasm of the target cell, siRNAs bind to their complementary messenger RNA and when this happens the messenger RNA is cleaved and destroyed, he says. “If you transfect cells with siRNAs targeting the CCR5 co-receptor, RNAi will dramatically downregulate the expression of this receptor,” he says, and as a result, HIV will not find any binding site on the cell membrane to enter the cell. “When you knock out the CCR5 receptor, the door for HIV to enter its target cell is closed,” Basar says.

During his work at BWH, Basar became very interested in harnessing RNAi to fight AIDS and cancer. “I started to look for a lab that combined RNAi with HIV or cancer research,” Basar says. Later that year, at an HIV symposium, Basar met Lieberman, a senior investigator at the Immune Disease Institute at Harvard Medical School, and was intrigued by her research. Lieberman’s lab was studying ways that RNAi could be used to create drugs for the prevention or treatment of viral infections, like HIV, and cancer. In fact, Lieberman’s group was the first one to successfully use siRNAs to inhibit genital herpes simplex virus transmission in mice.

Basar joined Lieberman’s team in 2006 and his first research project was focused on the development of an siRNA-based topical microbicide to prevent vaginal HIV transmission in mice. As a result of this research, Basar and his colleagues have developed two promising strategies based on RNAi technology and plan to publish their findings soon.

Basar is now applying the knowledge he gained working on an siRNA-based HIV microbicide toward developing new methods of siRNA delivery into breast cancer stem cells. At the same time he has become more and more interested in understanding how siRNAs are trafficked within a cell.

Although RNA interference offers an exciting new approach for drug development, one major obstacle for using siRNAs as therapy remains their delivery into target cells, says Basar. “The big question, in the context of RNAi, is: How can you deliver siRNAs into different target cells? And how can you ensure that siRNAs, upon uptake into cells, translocate into the cytoplasm to become functional?”

Basar thinks that this mechanistic question will occupy him and other researchers well into the future. “How are siRNAs binding to a cell, how are they taken up into a cell, and what’s their fate once inside the cell? There are so many questions,” he says. “A few years ago, I couldn’t understand how a scientist could spend a decade focusing on understanding a biological mechanism, because as a physician my focus has always been translational research,” he says. “Now, I’ve become the scientist interested in the mechanisms of siRNA trafficking.”

Basar says that the biological processes underlying HIV and cancer are far more complex than he initially imagined. “That’s why you have to combine the knowledge of many researchers to get the most out of science.” Basar believes that building bridges and improving communication between scientists is just as important as the research itself.

“Science has a bad reputation for not reaching out, for not networking and getting outside the lab,” Basar says. “Nowadays biomedical research requires a high degree of specialization, which is very costly, so it’s important to team up with other people to share knowledge and take advantage of the special skills research fellows have developed over years,” he says.

In an effort to build social bridges across Harvard, Basar served as co-chair of the Harvard Medical School Postdoctoral Association for two years, where he coordinated a series of networking events. He also joined with fellow German students in 2008 to organize the first Harvard German Conference, which featured Frank-Walter Steinmeier, the German secretary of state, as the keynote speaker.

Basar has also expanded his networking efforts outside the lab by becoming a partner of the start-up company InterNations, the first online international community geared toward connecting expatriates and other globally minded people. Basar regularly helps organize InterNations events in Boston. “Building an international network and getting people together inspired me; it’s a very intriguing concept,” he says.

But using science to help others remains Basar’s core inspiration. “For me as a physician it’s exciting to work on a drug, to work on something that immediately translates into healing a disease,” Basar says. “There’s a possibility that our research and contributions will help fight disease and hopefully positively impact health. That’s the power of research.”