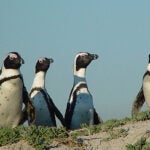 The march is on

College Dean Evelynn Hammonds officially welcomed freshmen and their families to Harvard Thursday (Aug. 26) during a ceremony at Sanders Theatre, and vowed to “to help prepare students for the transitions to come and move them from a position of receiving and learning knowledge, to serving, teaching and leading others.”

The standing-room-only crowd filled the historic hall and cheered as the College band kicked off the afternoon’s program — part of Opening Days 2010 — with a rendition of “Ten Thousand Men of Harvard” and other traditional school fight songs. Soon after, Hammonds took to the podium and lauded the weather, suddenly warm and sunny after “four solid days of rain.”

The dean described her role at Harvard, saying that it was her responsibility to “anticipate the challenges and envision the possibilities of Harvard College and to leverage every available resource of this great institution to realize our full potential to shape tomorrow’s leaders — your sons and daughters — and to challenge them intellectually, socially, and morally.” She pledged to promote the development of the University’s undergraduates.

“I accepted the job of dean of Harvard College to give my very best energy to making this institution help all students reach their fullest potential,” she said, adding that, as the University’s mission states, “Education at Harvard should liberate students to explore, to create, to challenge, and to lead.”

“I hope you’ll trust that many of us are working hard — including me — to ensure that your sons and daughters are well supported here at the College,” she said. “It is our job, and we all take this responsibility very seriously.”

Thomas A. Dingman, dean of freshmen, followed Hammonds’ remarks with some words about the challenges facing families and students. He told a story about Harvard alumnus and U.S. Supreme Court Justice Oliver Wendell Holmes, who once boarded a train, only to find he’d lost his ticket. When the conductor recognized Holmes and said that the jurist could simply mail in his ticket when it turned up, Holmes replied, “You don’t understand. I don’t know where I’m going!” Dingman said new students too would have moments when they didn’t know where they were going. He promised that Harvard would do its best to guide them.

Margaret McKenna, a psychiatrist at Harvard University Health Services and an alumna of the College, wrapped up the program with advice gathered from 20 years of working with students. She told parents they would likely experience a range of emotions — from relief to grief — as they dropped their children off at school and urged them to “remain nurturing while promoting ever-greater autonomy” for them.

“Be available,” she told mothers and fathers. “Be realistic. Don’t panic.

“It’s always helpful to be reminded to take a step back and let your child work through things,” said Deborah. “These are important years for a child to develop intellectually and academically.”

Describing himself as an “empty nester as of 20 minutes ago,” Francis Burke said he was excited about the opportunities Harvard would offer his son, Steven.