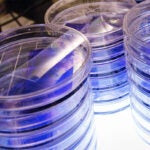 Two groups of Harvard Stem Cell Institute researchers have independently made similar discoveries about the characteristics of induced pluripotent stem cells (iPSCs), but they have reached somewhat different conclusions about the implications of the findings.

Groups lead by  CONTACT _Con-379F41B299 Konrad Hochedlinger at Massachusetts General Hospital and George Daley at Children’s Hospital Boston have each found that iPSCs retain some of the genetic characteristics — an epigenetic “memory” — of the cells from which they are derived.

Daley, a professor in Harvard’s inter-School Department of Stem Cell and Regenerative Biology (SCRB), concludes that “Stem cells generated by somatic cell nuclear transfer [SCNT] are, on average, closer to bona fide embryonic stem cells than are iPS cells. This has an important political message — we still need to study the mechanisms by which nuclear transfer reprograms cells, because the process seems to work more efficiently and faithfully. Learning the secrets of nuclear transfer may help us make better iPS cells.” (To date, nuclear transfer has not been done successfully in humans.)

Daley’s co-senior author, Andrew Feinberg, director of the Center for Epigenetics at Johns Hopkins University School of Medicine, says, “We found the iPS cells were not as completely reprogrammed as the nuclear transfer stem cells. Namely, DNA methylation [the natural process that ‘tells’ the cells to remember what they are supposed to be] was incompletely reset in iPS cells compared to nuclear transfer stem cells. Further, the residual epigenetic marks in the iPS cells helped to explain the lineage restriction, by leaving an epigenetic memory of the tissue of origin after reprogramming.

“This paper opens our eyes to the restricted lineage of iPS cells,” said Feinberg. “The lineage restriction by tissue of origin is both a blessing and a curse. You might want lineage restriction in some cases, but you may also have to do more work to make the iPS cells more totally pluripotent [able to be reprogrammed into any cell type].”

Kitai Kim, PhD, a postdoctoral fellow in the Daley lab and first author on the paper, tested mice iPS cells head-to-head with an older type of pluripotent cell made through somatic cell nuclear transfer. Best known as the cloning method that created the sheep Dolly fourteen years ago, nuclear transfer reprograms an adult cell by transferring its nucleus into an unfertilized egg cell, or oocyte, whose nucleus has been removed. The process of transferring the nucleus immediately reprograms it epigenetically, replicating the same process that happens to sperm upon fertilization, Kim said.

Hochedlinger, an SCRB associate professor, says that his group, like Daley’s, found residual “memory” in iPS cells. However, Hochedlinger’s group also found that when the iPS cells are cultured multiple times eventually the genetic “memory” of their origin fades, and after about 10 passages — or splitting the cell culture into smaller populations, allowing those populations to grow, and then repeating the process — it is erased.

“How faithfully iPSCs can be reprogrammed into a truly embryonic state has been a longstanding question, and we have found that the cell of origin does affect the capacity of iPSCs to differentiate in vitro into particular cell types,” says Hochedlinger. But when cultured iPSCs go through many rounds of cell division, they lose that memory, he says.

“Completely reprogramming cells appears to be a gradual process that continues beyond the iPSC stage, which may explain many of the reported differences between iPSCs and embryonic stem cells,” says Hochedlinger. “The propensity of early-passage iPSCs to regenerate specific cell types could have clinical advantages, but there also are implications for the use of iPSCs to model diseases, since we’ll need to make sure that differences between cells derived from patients and from healthy controls really reflect a disease process and not this cell-of-origin memory.”

Daley notes that epigenetic memory may be helpful for some applications, such as generating blood cells from iPS cells originally derived from a person’s own blood. However, continued the Howard Hughes Medical Institute investigator, the memory may interfere with efforts to engineer other tissues for treatment in diseases such as Parkinson’s or diabetes, as well as interfere with using the cells to study the same disease processes in laboratory dishes and to test drugs for potential treatments and toxicities.

“These findings cut across all clinical applications people are pursuing and whatever disease they are modeling,” said Daley. “Our data provide a deeper understanding of the iPS platform. Everyone working with these cells has to think about the tissues of origin and how that affects reprogramming.”

Hochedlinger’s work was supported by the Howard Hughes Medical Institute (HHMI), the National Institutes of Health, the Burroughs-Wellcome Fund and HSCI.

— Sue McGreevey of Massachusetts General
Hospital and Carol Morton of Children’s Hospital Boston both contributed to
this report.