Racing down the river 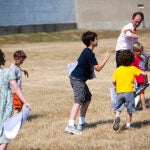 From scorched lot to library park

Harvard professor will compete in the Charles

Pierre Bélanger is a scholar of landscape, infrastructure, and urbanism at Harvard’s Graduate School of Design. But this Sunday (July 11), the associate professor will trade his books and maps for a bathing suit to join 100 other master swimmers in a mile race in the Charles River.

It’s an event that defies an old local story: that you swim in the Charles only to get out of it.

To Bélanger, an open-water swimmer for 10 years, the race is a chance to celebrate the river’s ecological comeback, and to raise awareness about preserving fresh water resources everywhere. “The future of clean water,” he said, “is the future of civilization.”

Bélanger, whose research revolves around clean drinking water and urban rivers, looks forward to the day when a public resource can be used regularly by the public — a day when you can “see thousands of swimmers on the waterfront of the Charles River,” he said, “and not just people sprinting along on a Sunday.”

It is currently illegal to swim in the Charles without special permission.

Sunday’s race, which will include other Harvard entrants, is co-sponsored by the Charles River Conservancy, a decade-old advocacy group based in Cambridge, and the Charles River Swimming Club, founded in 2005.

The club’s major event is the annual race, open to swimmers 16 and older. One of its goals is to speed the return of public swimming to a body of water that the club Web site admits “has a speckled past.”

Bélanger, who grew up in Toronto, has long been aware of the importance of fresh water. His native region adjoins the Great Lakes, which make up about a quarter of the world’s freshwater resources.

The professor considers the Charles a wonderful asset, and sees the race as a strategy to make the river more visible as an ecological resource.

The Charles is an infrastructure just as important as roads and streets, said Bélanger. But he realizes that it may not be viewed this way, which is a main reason for his race participation.

“The race next Sunday is more than just a competition,” said Belanger. “It is a challenge to everyone in the city who looks, sees, watches, enjoys, lives near the water.”

It is imperative for the Harvard community to become more involved in Charles River research, said Bélanger, and in preserving the freshwater resources so close to the University.

Several factors could cancel Sunday’s race, including a stormwater overflow from expected rains or an increase in algae production based on the high temperatures that Boston has endured this week. But Bélanger remains optimistic it will take place.

His goal is to finish in under 12 minutes, though he says open-water swimming is “more about endurance and pace, not speed and sprinting.”

His long-term athletic goal? To swim across Lake Ontario, a distance of about 25 miles.

Bélanger looks forward to a growth spurt for the sport of open-water swimming. As for the Charles, he said: It will be a beautiful day when people can go outside and swim in it regularly.