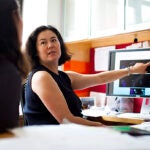 Learning in the labs

Master’s degree in religion, check. Dissertation for a doctoral degree (involving ethnographic study of people raised in the fundamentalist Christian tradition who ultimately broke away from it through arts intervention), check. Organic sandwich cart, check.

On Tuesday afternoons this summer, a hungry crowd convenes just outside Harvard’s Science Center, waiting patiently in front of a small white cart on wheels for mouthwatering grilled sandwiches.

Customers mill about near the Tanner Fountain rock garden in anticipation of tasty treats such as the Renegade (made with pepper jack cheese, baby arugula, and heirloom tomatoes), the Gouda Afternoon (a combination of Gouda cheese, avocado, and cilantro), or the Elvis (peanut butter, sliced bananas, with a side of Somerville’s own marshmallow Fluff and, as the menu states, “a chance to commune with ‘the King’ ”).

Lefty’s Silver Cart is the work of Philip Francis, a doctoral candidate at Harvard Divinity School with an affinity for profound reflection, and for produce. His model is simple: Create gourmet grilled cheese sandwiches, using locally grown and developed products, and a helping of good humor.

“It’s grilled sandwiches by day and Nietzsche by night,” said Francis, who hopes to defend his thesis this fall and begin looking for a job as a professor.

The Maine native started operating the cart after an intense period of study following his general exams prior to his dissertation. Living with books night and day, he said, left him wanting “to hit my thumb with a hammer a few times and become grounded again, and this cart was just a great chance.”

A popular staple at the Farmers’ Market at Harvard, Lefty’s has been a regular repeat vendor since 2007. The cart got its start at the Renegade Craft Fair in Brooklyn, N.Y., the same year, but soon branched out to a variety of music festivals and local farmers’ markets.

“It’s food by nomads for nomads. I’m drawn to the carnival, on-the-road feeling.  I like being in a self-contained unit that can pick up and move,” said Francis.

Dara Olmsted, food literacy project coordinator and market manager of Harvard’s Hospitality & Dining Services, loves the diversity that Lefty’s contributes to the Farmers’ Market at Harvard and the fact that Francis buys many of his sandwich fixings there.

“He shops at the market for a lot of his produce, which supports our farmers,” she said. “People regularly ask when the cart will be back. He is very popular.”
In a nod to the market, Francis is sure to give his sandwich ingredients top billing.

He notes on his menu that his cucumbers come from Lanni Orchards, his mozzarella from Fiore di Nonno, and his Gouda from Narragansett Creamery, all regular vendors at the market. For his popular banana chocolate smoothie (made on a bike-powered blender), Francis uses chocolate from Taza Chocolate, a local manufacturer. Satisfied diners only have to walk a few steps to the nearby stalls to find more of the same ingredients that they can buy and bring home.

“That was the idea, to build this kind of synergistic thing between us and the farmers, and it has been great. The farmers love having us. I think it brings a little more festiveness to the market, and it draws people in,” he said.

When he decided to enter the business, jumping on what he felt was an emerging, “hip trend” in food carts, he went to the one place he knew he would find exactly what he was seeking: eBay.

Francis was close to purchasing a cart with a serious pedigree, one rumored to have toured with the Grateful Dead in the ’70s, but got priced out in a heated bidding war. Instead, he settled on a retired kettle corn cart belonging to a couple in Vermont. With a few adjustments, it was ready to go, as was Francis, who admitted that getting the business up and running has been largely a process of trial and error, much like his newest addition to the operation, the bicycle blender.

On Friday, rigged to a cobalt blue Space Rider tricycle next to his cart was the top half of a blender filled with fruit, juice, and ice. Keeping a hand on the blender top, Francis set a steady pace on the three-wheeled bike to mix the concoction. A quick taste test revealed large ice cubes still intact.

“It just doesn’t quite have the power,” he said. “We need to work on the interface.”

Restaurant work runs in his family, and helps inform his operating ethos. His grandfather ran a diner in Connecticut.