By ‘putting a ring on it,’ microparticles can be captured 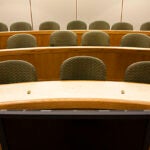 To trap and hold tiny microparticles, research engineers at Harvard have “put a ring on it,” using a silicon-based circular resonator to confine particles stably for up to several minutes.

The advance, published recently in Nano Letters, could one day lead to the ability to direct, deliver, and store nanoparticles and biomolecules on all-optical chips.

“We demonstrated the power of what we call resonant cavity trapping, where a particle is guided along a small waveguide and then pulled onto a micro-ring resonator,” explains Kenneth Crozier, an associate professor of electrical engineering at the Harvard School of Engineering and Applied Sciences (SEAS) who directed the research. “Once on the ring, optical forces prevent it from escaping, and cause it to revolve around it.”

The process looks similar to what you see in liquid motion toys, where tiny beads of colored drops run along plastic tracks—but on much smaller scale and with different physical mechanisms. The rings have radii of a mere 5 to 10 micrometers and are built using electron beam lithography and reactive ion etching.

While using planar ring resonators to trap particles is not new, Crozier and his colleagues offered a new and more thorough analysis of the technique. In particular, they showed that using the silicon ring results in optical force enhancement (5 to 8 times versus the straight waveguide).

“Excitingly, particle-tracking measurements with a high speed camera reveal that the large transverse forces stably localize the particle so that the standard deviation in its trajectory, compared to a circle, is as small as 50 nm,” says Crozier. “This represents a very tight localization over a comparatively large distance.”

The ultimate aim is to develop and demonstrate fully all-optical on chip manipulation that offers a way to guide, store, and deliver both biological and artificial particles.

The authors acknowledge funding from the Harvard Nanoscale Science and Engineering Center (NSEC) and the Center for Nanoscale Systems at Harvard, both supported by the National Science Foundation (NSF).