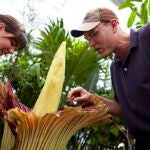 New test could predict best treatment for children with leukemia

A genetic clue uncovered by Harvard researchers at Dana-Farber Cancer Institute enables doctors to predict, for the first time, which children with T-cell acute lymphoblastic leukemia (T-ALL) are unlikely to benefit from standard chemotherapy for the disease and should therefore be among the first to receive new treatments in future clinical trials.

In a study in the Journal of Clinical Oncology, which was published online today  (July 19), the investigators report that young people with T-ALL whose leukemia cells harbor an intact TCR-gamma gene generally have a poor response to “induction” chemotherapy — the first course of drugs given at the time of diagnosis to spur cancer remission. Patients with this high-risk marker will be prime candidates for clinical trials in which therapies currently in development are tested.

“Even though we can cure a large subset of children with T-ALL, about 25 percent of pediatric patients with the disease die of it, either because first-line chemotherapy fails, or because they relapse after being in remission for a year or two,” said the study’s lead author, Alejandro Gutierrez, a Harvard Medical School (HMS) instructor in pediatrics at Dana-Farber. “Until now, there has been no way of determining ahead of time whether a patient is likely to be helped by the standard regimen of front-line drugs.”

ALL, a cancer of the white blood cells, is the most common malignancy in children. T-ALL, which affects lymphocytes (lymph cells) known as T cells, accounts for about 15 percent of all pediatric ALL cases, or about 1,500 new diagnoses annually in the United States, according to the American Cancer Society.

To see if T-ALL cells contain any hints of their likelihood to resist traditional chemotherapy, investigators performed genomic tests on leukemia cells from 47 children with T-ALL, 25 of whom were long-term survivors, nine of whom failed to achieve complete remission after induction chemotherapy, and 13 who relapsed after going into remission.  The molecular test, known as comparative genomic hybridization, probes thousands of genes to see if any are present in unusual quantities in the cells.

“We found that patients whose cells did not have rearranged DNA in the TCR-gamma gene were the most likely to fail induction therapy. Of the 47 samples studied, eight had this particular high-risk marker. Six of those patients did not respond to first-line chemotherapy,” said Gutierrez.

Tumor samples from patients whose disease relapsed after going into remission were found to have TCR-gamma rearrangements at the time of diagnosis.  In some of these patients, however, rearrangements were not found after relapse.  Researchers believe that such patients almost certainly had a small number of leukemia-initiating cells without rearrangements at diagnosis, but in quantities too small for detection, said the study’s senior author, A. Thomas Look, an HMS pediatrics professor at Dana-Farber. After the DNA-rearranged cells died in response to chemotherapy, the remaining chemo-resistant cells came to predominate.

Other molecular studies are giving scientists leads as to which genes and gene pathways are responsible for the ability of some T-ALL cells to defy conventional chemotherapy, said Gutierrez. Some of these genes are known to be targeted by drugs currently being studied in clinical trials for other diseases, raising the possibility that they might be effective for certain T-ALL patients as well.

“Given the relatively high failure rate of conventional induction therapy for this disease, there is an urgent need to test alternative chemotherapy agents in patients,” Gutierrez remarked.  “Routine testing for rearrangements in TCR-gamma,” which could be accomplished fairly inexpensively with a standardized test, “would enable us to identify which patients could gain the most benefit from these agents.”

The research was supported by grants from the National Institutes of Health, the William Lawrence Foundation, and the Community Foundation of the National Capital Region.

Dana-Farber Cancer Institute is a principal teaching affiliate of the Harvard Medical School.