The elusive titan arum is a prehistoric sight. The unusual plant, housed at the greenhouse at the Biological Laboratories building, is more than 4 feet tall with a skyward-jutting branch called an inflorescence that’s more reptilian than tabletop bouquet.

Blooming began on Sunday (July 11), and on Monday the oddity sent flocks of Harvard employees across campus to witness the phenomenon. Douglas Goldman, an associate at the Harvard University Herbaria, was on site to explain the plant’s origin. Indigenous only to the rainforests of Sumatra, the plant was germinated at the University of Connecticut in 1995 and brought to Harvard by Goldman in 2002.

This is the first time it’s bloomed in its eight-year stay at Harvard, he revealed. But that’s not necessarily a good thing. When blooming, the plant releases a putrid fragrance — like that of rotting meat. The scent is meant to attract flies, which then pollinate the plant.

Lasting only a few days before dying, the inflorescence can reach over 10 feet in circumference and 8 to 9 feet in height. But greenhouse staff intentionally kept this specimen on the small side. By using a smaller pot, the plant’s growth is restricted.

Goldman plans to cut up the plant and store it as a specimen in the Harvard Herbaria’s vast holdings. However, the titan arum will live on. The corm — its underground spherical stem — will produce another structure yet, which Goldman hopes will bloom again … in another five years.

Read more about the titan arum. 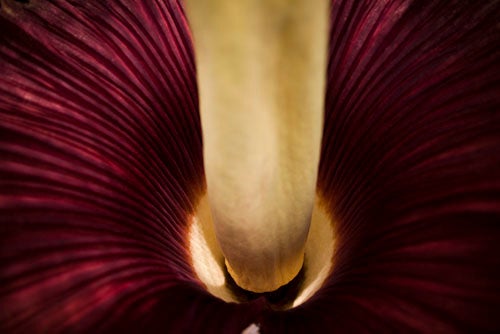