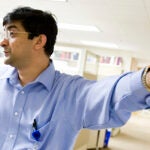 Harvard and Brigham and Women’s Hospital researchers have devised a method that may allow clinicians to use higher doses of a powerful chemotherapy drug that has been limited because it is toxic not only to tumors but to patients’ kidneys.

The research, conducted in laboratory animals, marries chemistry and nanotechnology to deliver toxic platinum atoms to tumors while almost entirely blocking the platinum from accumulating in the kidney, according to Shiladitya Sengupta, a Harvard assistant professor of medicine and health sciences and technology whose Laboratory for Nanomedicine at Harvard-affiliated Brigham and Women’s Hospital conducted the work.

Sengupta has focused his research for three years on cisplatin, a powerful anti-cancer drug used in first-line chemotherapy. Sengupta said the drug, discovered about 40 years ago, has many positive aspects. It is relatively inexpensive and effective against many cancers. Its toxicity, however, limits its use.

“Even if you can see amazing results as an anti-tumor therapy, you can’t give more,” Sengupta said.

Despite several attempts, cisplatin hasn’t been improved upon, Sengupta said. Two similar drugs that also incorporate platinum are on the market, but while they are less toxic to the kidney, they are also less active against tumors.

Though the chemistry involved is complex, the key to cisplatin’s effectiveness — and its toxicity — lies in how easily it releases platinum, both at the tumor site and, undesirably, in the kidneys.

Manufacturers of the two alternative drugs have reduced those drugs’ toxicity by making them hold onto their platinum more tightly. Sengupta’s work took a different track, however. Understanding that particles greater than five nanometers in size would not be absorbed by the kidney, he set out to engineer a super-sized cisplatin.

Understanding the chemical properties of the cisplatin molecule and the laws that govern molecular folding, his team designed a polymer that would bind to cisplatin, much as a thread runs through a bead’s central hole. By stringing together enough cisplatin, the whole molecule wrapped itself into a ball, 100 nanometers in size, too large to enter the kidney.

It took a couple of tries to get the molecular design right, Sengupta said. Though the initial design proved nontoxic to kidneys, it wasn’t as effective as the original cisplatin. Sengupta and colleagues tweaked the chemical formula so the molecule didn’t hold quite so tightly to the platinum atoms.

Studies conducted by Basar Bilgicer, assistant professor at the University of Notre Dame, showed that the molecule accumulated in tumor tissue, whose leaky blood vessels allowed it to pass out of the capillaries that feed the tumor. The molecule is too large to pass into other tissues, such as the kidney, lungs, liver, and spleen. Once lodged in the tumor, the higher acidity there caused the molecule to fall apart, dumping its toxic load on the cancerous tissue.

“It showed absolutely minimal toxicity to the kidney,” Sengupta said.

The new compound has been found to be effective against lung and breast cancers. Instructor in pathology Daniela Dinulescu at Brigham and Women’s Hospital also demonstrated that the nano-compound outperformed cisplatin in a transgenic ovarian cancer model that mimics the disease in humans.

The research, which received funding from the National Institutes of Health and the Defense Department’s Breast Cancer Research Program, has not been tried in humans, and would require potentially lengthy testing before being ready for patient care.

Sengupta praised the work and creativity of fellows Abhimanyu Paraskar and Shivani Soni on the project.