Their sails are set 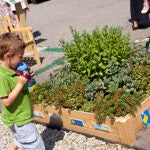 A ‘green street’ for Allston

“You can feel the energy in the room,” said Maxine Rodburg, director of the Crimson Summer Academy (CSA), as she raised her voice to be heard above the din of students talking and laughing amid yellow streamers and blue balloons that read “Welcome Back!”

“There’s always been this amazing sense of camaraderie and a true sense of warmth among our scholars,” Rodburg said. “You can see it again tonight.”

About 100 current and former CSA scholars gathered Wednesday (June 23) in Boylston Hall’s Ticknor Lounge for a reunion barbecue, reveling in a rare chance to catch up with fellow scholars and meet new ones.

Founded in 2004 as part of an initiative to improve access to college for talented, economically disadvantaged students in the Boston and Cambridge areas, CSA brings them to campus for three consecutive summers in a rigorous academic program. With the inaugural class of scholars having finished their junior year in college, the lasting impact of the program is just now becoming evident.

“It’s really exciting,” said Juliana Santoyo, a member of the first CSA class, who is now a rising senior at Boston College, studying English and philosophy. “I’m so happy to see it succeeding.”

Sitting at a table with other members of that original class, Santoyo and her colleagues sat chatting and joking as if it had been only yesterday since they’d seen each other, and not three years. One student had just returned from her junior year abroad in South Africa. Another was just back from Australia.

“I feel old,” joked Jefferson Correia, as he surveyed the room of scholars who have followed since he graduated from CSA in 2007. Now studying accounting at Syracuse University and back from a semester in Hong Kong, Correia rejoiced in how far he has come since applying to CSA seven years ago.

“Never in my life would I have expected I’d be doing stuff like that,” he said. “I see kids I went to middle school with, and they never left [Cambridge]. I feel like a lot of that stems from the confidence CSA gave me, to know that I could go away and succeed.”

Laura Ospina, a Cambridge resident and now a junior at Tufts, agreed. Her dream was to study abroad, and there she was, freshly returned from a year of study in Spain.

“They [CSA] really made it all attainable … they gave me the backup I needed to achieve my dreams,” said Ospina, who is working as a CSA mentor this summer.

Across the room, Rodburg threw her arms around Marjorie Lopez Marinez, a sophomore at Georgetown University, who walked in from her summer job smartly dressed in pearls and heels. A native of Boston’s Mission Hill neighborhood, Lopez Marinez is interning this summer at Sen. John Kerry’s office in Boston and will continue interning in Washington, D.C., this fall, working around her school schedule.

The event was an opportunity to reflect on the dozens of success stories in the room. Harvard grad Roxanna “Roxie” Myhrum ’05, who mentored students during CSA’s first year, emphasized the program’s success as a whole.

“Doing anything for the first time is hard, but doing something like CSA with this level of ambition was amazing to be a part of. It really inspired all of us to give all we had to the program,” said Myhrum.

CSA scholars live on campus and attend classes for five to seven weeks. They receive financial support in the form of laptops, stipends to replace lost summer earnings, and $3,000 scholarships to the colleges of their choice on completion. In addition, they are given year-round mentoring and guidance on academics and in selecting and applying to colleges, something that many can’t get at home. To date, all Crimson Scholar graduates have been accepted to four-year universities.

“If I hadn’t done CSA, I would have had a lot of misconceptions about college,” said Tobias Estime, who graduated from Cambridge Rindge & Latin in 2009. “I probably wouldn’t have really considered going to college.”

Estime is back at CSA for the summer working as a mentor. He just finished his first year at Harvard.