The mystique of merit pay 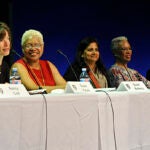 The questions of whether to tie teachers’ pay to classroom performance, and whether that might lead to improved student achievement, have long been subjects of intense debate.

The issue is again at the forefront of the national dialogue in the wake of President Barack Obama’s “Race to the Top” education initiative, a $4 billion competitive grant program that rewards states that develop academic reforms to boost school improvement, and encourages states to embrace merit-pay plans.

In a two-day seminar at Harvard last week (June 3-4), scholars, politicians, and educators gathered at Harvard Kennedy School (HKS) to discuss the value and feasibility of performance pay. The Harvard Program on Education Policy and Governance at HKS organized the conference, which was called “Performance Pay: Will it Work? Is it Politically Viable?”

While there is evidence suggesting that some merit-pay initiatives can improve student performance, the experts agreed that support for such programs is mixed, and that much research needs to be done to evaluate their overall effectiveness.

Obama’s position on performance pay has grown increasingly supportive, said Andrew Smarick of the American Enterprise Institute and Thomas B. Fordham Institute, who explored the political dimensions to the merit-pay debate. Smarick said that Arne Duncan, Obama’s secretary of education, supported performance-pay programs while he was chief executive of the Chicago Public Schools, and also backed its inclusion in “Race to the Top” applications.

But the Obama administration favors merit-pay programs, said Smarick, as part of a “range of personnel and policy decisions” to help school performance.

“They like performance pay, but it’s going to be part of a wide network of different activities that improve the teaching profession,” said Smarick, adding, “It’s clear that they are trying to build this new policy framework of trying to make sure that evaluations and student test data, and this whole suite of reforms, are integrated together.”

Yet getting teacher unions to support merit-pay plans broadly will be difficult, said Smarick, who noted that only Delaware (one of the two states to receive grants in the first round of “Race to the Top” applications) had full union support.

“This deference to unions is just something you can’t get around, in my view,” he said.

Responding to Smarick’s comments, Roberto J. Rodríguez, who serves on the White House Domestic Policy Council as special assistant to the president for education, agreed that performance pay plays an important part in the administration’s broader educational reform agenda.

“We really are seeking to … challenge the status quo in our schools … and have really sought to bring folks together around performance-based compensation reform, as well as around a whole host of our education reform platforms, and really look at how we can drive change for kids.”

The seminar included a series of papers that addressed a variety of merit-pay topics, including programs operating in American school districts and in other countries.

In addition, research by Sarena Goodman and Lesley Turner of Columbia University examined a New York City bonus-pay program. According to Goodman, the initiative had little impact on teacher effort or student achievement largely because of its group-based structure that led to “free-riding” behavior by some participants who did not embrace the program.

“What we argue with this paper is that the structure of this bonus program, in particular … school-level bonuses, led to ‘free riding,’ which significantly reduced incentives for teachers to change their behavior,” said Goodman.

Responding to the paper’s findings, Elena Llaudet, a graduate student and research associate at Harvard’s Department of Government, called for more analysis of such programs to determine their true value.

“We need more pilot programs … implemented and evaluated,” she said, “so that we can tease out which structures of merit-pay programs work and which don’t.”