The immune system and HIV 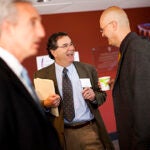 A long look at growing old

Researchers probing the secrets of HIV and AIDS gathered at Harvard Medical School Wednesday (June 23) to share information about the latest advances in understanding how the oldest part of the body’s immune system might help in the fight against HIV.

The human immune system, which fights off bacteria, viruses, and other invaders to keep people healthy, has two major branches. The “adaptive” immune system evolved most recently and is made up of components such as antibodies, B-cells, and T-cells. It is the part of the immune system that “remembers” a first-time invader, such as chicken pox, and mounts an immune response the next time the virus enters the body.

The “innate” immune system is much older and is shared with a wide range of species, including plants, insects, and fungi. When an invader is recognized, that system mounts a general attack that includes, among its many responses, inflammation, mobilization of white blood cells to engulf invaders, and natural killer cells to attack infected host cells.

Event organizer Dan Barouch, associate professor of medicine at Harvard Medical School and chief of the Division of Vaccine Research at Harvard-affiliated Beth Israel Deaconess Medical Center, said recent advances in understanding innate immunity made this a good subject for this year’s scientific symposium, hosted by Harvard’s Center for AIDS Research (CFAR). The session was attended by scientists ranging from students to junior researchers to senior faculty members.

The event was designed for scientists to exchange information and to spark new thinking and collaborations among researchers whose work might prove complementary.

“One of the principal goals of the Harvard CFAR is to bring researchers together, either within a discipline, or, more importantly, across disciplines,” Barouch said. “Innate immunity is a good example of that because it really brings together people interested in vaccine work, pathogenesis, basic virology,” he said, “and the clinical aspects of innate immunity are of interest to clinicians and a wide variety of people in different fields. The hope is that these sessions today will help bring investigators together from different disciplines across the Harvard CFAR and will stimulate further collaborations and synergy.”

The researchers came from Harvard, affiliated hospitals, the National Cancer Institute, the Institute for Systems Biology in Seattle, and the Koch Institute for Integrative Cancer Research at the Massachusetts Institute of Technology. The attendees discussed technical topics, including cooperation between innate and acquired immune response genes, using systems biology to help design a vaccine, and the recruitment of natural killer cells in attacking HIV.

Galit Alter, assistant professor at Harvard Medical School and a researcher at the Ragon Institute of MGH, MIT and Harvard, spoke about the role that antibodies from the adaptive immune system play in recruiting a potentially effective response against HIV from the innate immune system’s natural killer cells.