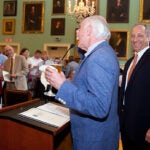 Camargo will study how tumor growth is inhibited in a tissue-wide context. Using a mouse model, Camargo and his team are determining whether mechanisms controlling tissue size act as critical regulators of tumor growth. Camargo’s research has focused studies on the Hippo pathway of genes to test this model. Using a range of molecular biological techniques and ribonucleic acid (RNA) interference screens, Camargo hopes to identify novel regulators of a signaling pathway known as the Hippo pathway and to then determine their role as tumor suppressor genes.

Gimelbrant’s laboratory will investigate how establishment of cell identity can be determined by the choice of which allele, maternal or paternal, will be expressed in a given cell lineage. He and his team have shown that this type of allelic choice occurs with many hundreds of human genes, creating an extraordinary epigenetic diversity in cell populations, such as those in the immune and nervous system. Gimelbrant’s team uses and develops a variety of approaches, including allele-specific arrays and whole-transcriptome next-generation sequencing, in order to build a comprehensive map of allele-specific expression and the correlated chromatin states.  This effort is under way in both human and mouse cells to gain an insight into the evolutionary context of allelic silencing.

To read the complete announcement.