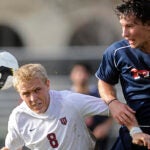 The former Volkswagen dealership and garage took on a decidedly sporty look Friday (June 18) as the Harvard Allston Field and Fairway officially opened beneath a warm, bright sun.

The scene outside 168 Western Ave. was a real-life reflection of the putting and batting paintings displayed on the former car showroom’s windows. Last winter, the space was turned into a community ice skating rink, and now it will be used as an urban batting and mini-golf facility that will be open through the summer and fall as the University seeks a long-term tenant.

Nearly 100 area residents came to help kick off the first of many fun weekends at the site, which is open to the public Fridays through Sundays.

For lifelong Allston resident Anwar Ahmedi and his 2-year-old daughter, Yari Burgos, it was an easy trip. He crossed the street from his home at the Charlesview Apartments.

“You know, you can walk to a park in Allston, but you can’t walk to a mini-golf course,” said Ahmedi. “This is great.”

Within 30 minutes of the opening, dozens of golfers were out on the “green,” a 100-by-120-foot freshly painted, paved area for the new 18-hole mini-golf course. At the same time, a few future big leaguers were swinging for the imaginary fences at two indoor batting cages. In the game room, Harvard officials held a raffle, and residents enjoyed cool air as well as fresh fruit from the nearby Harvard Allston Farmers’ Market that opened for the season the same day.

“It’s great to see families enjoying this space together,” said Executive Vice President Katie Lapp, who oversees the departments that installed the facility. The space is part of Harvard’s ongoing commitment to strengthen the active stewardship of its properties and enhance community vitality in Allston.

Ed Kotomori, another Allston resident, said the opening brought a new facet to the Harvard-Allston relationship.

“Programs like this bring the neighborhood and the University together. This type of activity — coupled with the education portal and other community programs — you can’t ask for a better relationship,” said Kotomori. He said he saw entire families, from grandparents to parents and their children, at the opening. He said the facility will be a great destination for children this summer, “to keep them safe and off the streets.”