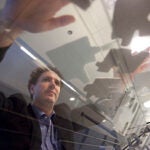 How touch can influence judgments

Researchers at Harvard’s Wyss Institute for Biologically Inspired Engineering have created a device that mimics a living, breathing human lung on a microchip. The device, about the size of a rubber eraser, acts much like a lung in a human body and is made using human lung and blood vessel cells.

Because the lung device is translucent, it provides a window into the inner-workings of the human lung without having to invade a living body. It has the potential to be a valuable tool for testing the effects of environmental toxins, absorption of aerosolized therapeutics and the safety and efficacy of new drugs. Such a tool may help accelerate pharmaceutical development by reducing the reliance on current models, in which testing a single substance can cost more than $2 million.

“The ability of the lung-on-a-chip device to predict absorption of airborne nanoparticles and mimic the inflammatory response triggered by microbial pathogens, provides proof-of-principle for the concept that organs-on-chips could replace many animal studies in the future,” says Donald Ingber, senior author on the study and founding director of Harvard’s Wyss Institute.

Click here to watch an interview with Donald Ingber.

The work is being published in tomorrow’s edition of Science.

Until now, tissue-engineered microsystems have been limited either mechanically or biologically, says Ingber, the Judah Folkman professor of vascular biology at Harvard Medical School (HMS) and Children’s Hospital Boston. “We really can’t understand how biology works unless we put it in the physical context of real living cells, tissues and organs.”

With every human breath, air enters the lungs, fills microscopic air sacs called alveoli and transfers oxygen through a thin, flexible, permeable membrane of lung cells into the bloodstream. It is this membrane—a three-layered interface of lung cells, a permeable extracellular matrix and capillary blood vessel cells—that does the lung’s heavy lifting. What’s more, this lung-blood interface recognizes invaders such as inhaled bacteria or toxins and activates an immune response.

The lung-on-a-chip microdevice takes a new approach to tissue engineering by placing two layers of living tissues—the lining of the lung’s air sacs and the blood vessels that surround them—across a porous, flexible boundary. Air is delivered to the lung lining cells, a rich culture medium flows in the capillary channel to mimic blood and cyclic mechanical stretching mimics breathing.The device was created using a novel microfabrication strategy that uses clear rubbery materials. The strategy was pioneered by another Wyss core faculty member, George Whitesides, the Woodford L. and Ann A. Flowers University Professor at Harvard.

“We were inspired by how breathing works in the human lung through the creation of a vacuum that is created when our chest expands, which sucks air into the lung and causes the air sac walls to stretch,” says first author Dan Huh, a Wyss technology development fellow at the Institute. “Our use of a vacuum to mimic this in our microengineered system was based on design principles from nature.”

To determine how well the device replicates the natural responses of living lungs to stimuli, the researchers tested its response to inhaled living E. coli bacteria. They introduced bacteria into the air channel on the lung side of the device and at the same time flowed white blood cells through the channel on the blood vessel side. The lung cells detected the bacteria and, through the porous membrane, activated the blood vessel cells, which in turn triggered an immune response that ultimately caused the white blood cells to move to the air chamber and destroy the bacteria.

“The ability to recreate realistically both the mechanical and biological sides of the in vivo coin is an exciting innovation,” says Rustem Ismagilov, professor of chemistry at the University of Chicago, who specializes in biochemical microfluidic systems.

The team followed this experiment with a “real-world application of the device,” says Huh. They introduced a variety of nano-scaled particles (a nanometer is one-billionth of a meter) into the air sac channel. Some of these particles exist in commercial products; others are found in air and water pollution. Several types of these nanoparticles entered the lung cells and caused the cells to overproduce free radicals and to induce inflammation.Many of the particles passed through the model lung into the blood channel, and the investigators discovered that mechanical breathing greatly enhanced nanoparticle absorption. Benjamin Matthews, Harvard Medical School assistant professor in the Vascular Biology Program at Children’s Hospital, verified these new findings in mice.

“Most importantly, we learned from this model that the act of breathing increases nanoparticle absorption and that it also plays an important role in inducing the toxicity of these nanoparticles,” Huh says.

“This lung-on-a-chip is neat and merges a number of technologies in an innovative way,” says Robert Langer, MIT Institute professor. “I think it should be useful in testing the safety of different substances on the lung and I can also imagine other related applications, such as in research into how the lung functions.”

According to Ismagilov, it’s too early to predict how successful this field of research will be.Still, “the potential to use human cells while recapitulating the complex mechanical features and chemical micro environments of an organ could provide a truly revolutionary paradigm shift in drug discovery,” he says.

The investigators have not yet demonstrated the system’s capability to mimic gas exchange between the air sac and bloodstream, a key function of the lungs, but, says Huh, they are exploring this now.

The Wyss Institute team is also working to build other organ models, such as a gut-on-a-chip, as well as bone marrow and even cancer models. Further, they are exploring the potential for combining organ systems.

For example, Ingber is collaborating with Kevin Kit Parker, associate professor at Harvard’s School of Engineering and Applied Sciences and another Wyss core faculty member, who has created a beating heart-on-a-chip. They hope to link the breathing lung-on-a-chip to the beating heart-on-a-chip. The engineered organ combination could be used to test inhaled drugs and to identify new and more effective therapeutics that lack adverse cardiac side effects.

This research was funded by the the National Institutes of Health, the American Heart Association and the Wyss Institute.