How touch can influence judgments 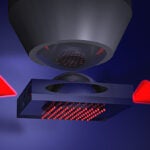 Psychologists report in the journal Science that interpersonal interactions can be shaped, profoundly yet unconsciously, by the physical attributes of incidental objects: Resumes reviewed on a heavy clipboard are judged to be more substantive, while a negotiator seated in a soft chair is less likely to drive a hard bargain.

The research was conducted by psychologists at Harvard University, the Massachusetts Institute of Technology, and Yale University. The authors say the work suggests that physical touch — the first of our senses to develop — may continue to operate throughout life like a scaffold upon which people build their social judgments and decisions.

“Touch remains perhaps the most underappreciated sense in behavioral research,” said co-author Christopher C. Nocera, a graduate student in Harvard’s Department of Psychology. “Our work suggests that greetings involving touch, such as handshakes and cheek kisses, may in fact have critical influences on our social interactions, in an unconscious fashion.”

Nocera conducted the research with Joshua M. Ackerman, assistant professor of marketing at MIT’s Sloan School of Management, and John A. Bargh, professor of psychology at Yale.

“First impressions are liable to be influenced by the tactile environment, and control over this environment may be especially important for negotiators, pollsters, job seekers, and others interested in interpersonal communication,” the authors wrote in the latest issue of Science. “The use of ‘tactile tactics’ may represent a new frontier in social influence and communication.”

The researchers conducted a series of experiments probing how objects’ weight, texture, and hardness can unconsciously influence judgments about unrelated events and situations:

— To test the effects of weight, metaphorically associated with seriousness and importance, subjects used either light or heavy clipboards while evaluating resumes. They judged candidates whose resumes were seen on a heavy clipboard as better qualified and more serious about the position, and rated their own accuracy at the task as more important.

— An experiment testing texture’s effects had participants arrange rough or smooth puzzle pieces before hearing a story about a social interaction. Those who worked with the rough puzzle were likelier to describe the interaction in the story as uncoordinated and harsh.

— In a test of hardness, subjects handled either a soft blanket or a hard wooden block before being told an ambiguous story about a workplace interaction between a supervisor and an employee. Those who touched the block judged the employee as more rigid and strict.

— A second hardness experiment showed that even passive touch can shape interactions. Subjects seated in hard or soft chairs engaged in mock haggling over the price of a new car. Subjects in hard chairs were less

flexible, showing less movement between successive offers. They also judged their adversaries in the negotiations as more stable and less emotional.

Nocera and his colleagues say these experiments suggest that information acquired through touch exerts broad, if generally imperceptible, influence over cognition. They propose that encounters with objects can elicit a “haptic mindset,” triggering application of associated concepts even to unrelated people and situations.

“People often assume that exploration of new things occurs primarily through the eyes,” Nocera said. “While the informative power of vision is irrefutable, this is not the whole story. For example, the typical reaction to an unknown object is usually as follows: With an outstretched arm and an open hand, we ask, ‘Can I see that?’ This

response suggests the investigation is not limited to vision, but rather the integrative sum of seeing, feeling, touching, and manipulating the unfamiliar object.”

Nocera said that because touch appears to be the first sense that people use to experience the world ╤ for example, by equating the warm and gentle touch of a mother with comfort and safety ╤ it may provide part of

the basis by which metaphorical abstraction allows for the development of a more complex understanding of comfort and safety. This physical-to-mental abstraction is reflected in metaphors and shared linguistic descriptors, such as the multiple meanings of words like “hard,” “rough,” and “heavy.”

Nocera, Ackerman, and Bargh’s work was supported by the Sloan School of Management at MIT and by the National Institute of Mental Health.