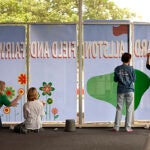 New University garden yields its first bounty of the season

They came, they saw, they ate salad.

The season’s first workday at the Harvard Community Garden on Wednesday (June 16) was not all about pulling weeds. In fact, a rainy afternoon kept actual work to a minimum.

But volunteers from the College, from Cambridge, and from elsewhere — working or not — were invited to taste fresh salad from the 25 raised beds planted in April.

Workdays like this, free salads included, will take place from 3 to 7 p.m. every Wednesday through the summer.

Six garden admirers showed up for the inaugural event, joining the garden’s two fulltime summer interns, Tyler Caldwell ’11 and Emily Osborne ’12. They both grew up gardening, and still see the value of getting their hands dirty.

“I wanted to see some results from what I was doing, as opposed to working in an office,” said Caldwell. He was raised in rural Delaware, where his grandparents kept a big garden.

“We water, we weed, we prune, we harvest,” said Osborne, who grew up in rural Massachusetts, helping in her grandfather’s kitchen garden. “We make sure the plants are generally happy.”

The garden at 27 Holyoke Place is planted with traditional New England kitchen crops, including cucumbers, carrots, scallions, beets, zucchini, herbs, Swiss chard, and beets. Nearby these days, choruses of hopping birds bug-hunt in the grass.

“The garden is useful not only to the whole community but also to Harvard students,” said Osborne, since they get more connected to nature and to where food comes from. “We live in a big, brick, paved space that is almost sterile.”

The two interns sat at a table set with jugs of lemonade, paper cups and plates, and containers of vinaigrette and lettuces picked just minutes before.

“It’s very fresh,” said Ho Tuan ’09, digging into a plate of salad greens. Joining him was Nicholas Krasney ’09, who stood in a light rain eating his own heaping salad. “At first,” he said of the day, “I thought I was going to have to buy lunch.”

Both are media technologists and entrepreneurs from across Mount Auburn Street at Harvard’s Technology and Entrepreneurship Center.

The 560 square feet of growing space is Harvard’s first official University garden in the last six decades. But it is more than an outward sign of Harvard’s environmental ethic and a source of fresh food, organizers say. The garden was designed to become a sort of living laboratory for diverse classroom pursuits and to encourage a sense of community.

The sponsors are University-wide, a sign of all the lessons a local garden can grow: Harvard’s Center for Health and the Global Environment (CHGE), the University Planning Office, the Office for Sustainability, Landscape Services, the Faculty of Arts and Sciences, and the Food Literacy Project, which is overseen by the Harvard University Hospitality and Dining Services.

When not weeding or harvesting, Caldwell and Osborne set up tours — a high school group has been through already — along with cooking demonstrations that will be videotaped to spread the message that local food is sustainable, fresh, and fun.

The interns are also assistant managers at the farmers’ markets hosted by Harvard’s Food Literacy Project on Tuesdays in Cambridge and Fridays in Allston.

Where do the crops go? To cooking demonstrations, to workday volunteers, and — once a week — a box of fresh produce goes to cooks at the Harvard Faculty Club.

“Our harvest is a little small to be selling to the larger dining services,” said Osborne. “It would be a drop in the giant lettuce bucket.”

Organizers say the garden is likely to expand. Planned additions include more raised beds, workstations, a bigger tool storage, and a system for harvesting rainwater.

The garden’s modular layout, said Ilana Cohen earlier this year, will make expansion easier. She was one of eight co-designers of the garden, all of them landscape architecture students at Harvard’s Graduate School of Design.

The garden is spaced along stone-dust patios intended to make social interaction easier. The staggered growing beds — 34, 20, and 16 inches high — also make for handy seating in what is a de facto park just off busy Mount Auburn Street.

Kathleen Frith, CHGE assistant director and now the project’s acting director, said earlier this year that faculty will be invited to a University-wide forum on ways to bring the lessons of the garden into the classroom.

Meanwhile, hope still reigns. Huddled under a green umbrella this week at the garden, Osborne offered: “We haven’t had any vegetable theft.”