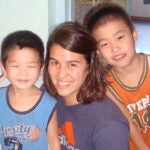 Changing lives, including her own

“I always had one foot in the affordable housing policy and development world, but never understood the real estate and economic fundamentals behind why a project did or didn’t work,” says Leadbetter. “My time at the Kennedy School has helped me to understand this, and has connected me to important actors in the field including academics, policy makers, and seasoned professionals.”

The development competition in which Leadbetter participated also has an HKS connection. Ten years ago, three HKS students co-chaired the inaugural Affordable Housing Development Competition in which teams of Boston-area graduate students partner with local housing organizations to propose a development plan for low- and middle-income housing in the Boston area. The competition is co-sponsored by business, housing, and academic groups and the winning partners share a $10,000 prize.

In explaining why she got involved in the competition, Leadbetter identifies affordable housing as being integrally connected to other issues of public policy. “Housing is the hearth of a community and an essential part of the well-being of individuals, families, and neighborhoods,” says Leadbetter. “But we don’t have to look any further than the recent credit, subprime, and foreclosure crises to see that housing can have a global impact.” She emphasizes that investment in affordable housing can be a long-term, stabilizing investment for communities and society as a whole.

Leadbetter’s winning team — which included students from the Kennedy School, the Harvard Graduate School of Design, and MIT — partnered with the Coalition for a Better Acre in Lowell, Mass., to come up with a plan for the adaptive reuse of an historic mill that had been sitting empty for nearly 20 years.

“The city of Lowell has a fascinating cultural history and redevelopment story that was a treat for our team to uncover and experience,” says Leadbetter. They proposed transforming the mill into a complex of 53 two- and three-bedroom units that includes space for community organizations, green space, and parking, with affordability and green design elements being prominent in the plan.

Lowell — like all of the communities in which Leadbetter has worked — is a mix of long-term residents as well as immigrant communities. “I’ve always had one foot in the international world,” she says, which is why she was attracted to HKS for its international student body as well as the quality of its professors.

Leadbetter took Nicolas Retsinas’ “Real Estate in Emerging Markets” class, which had both an international and domestic aspect, and completed a project focusing on Rwanda. Among other favorite courses were Edward Marchant’s “Affordable Housing” and Eric Belsky’s “Housing Policy in the U.S.”

“Eric Belsky’s class is great because so many practitioners and young people get into housing thinking mostly about subsidized housing,” says Leadbetter. “Belsky reframes the question in terms of the private sector and a cross–sector commitment to affordable housing.”

After graduation, Leadbetter plans to work locally with the Cambridge Housing Authority for the summer and will be seeking international affordable housing work for the fall. Of the future, she says, “I chose the midcareer program at HKS because I could combine public policy, real estate, business, and urban planning. It’s a lot to do in just one year, but I feel confident that I’ve been able to fundamentally improve my understanding of what it takes to create positive change through community development and affordable housing — now I’m eager to get back out there in the community and help make that happen.”