A long look at growing old 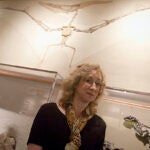 Be wary of the cassowary

Scientists share research on easing the ailments of aging

Amid the technical talk about sirtuins, resveratrol, and stem cells at Harvard Medical School (HMS) on Monday (June 21), a nontechnical message became clear: Progress is slowly being made in understanding why people age and in laying the foundation to lessen the debilitating diseases of aging.

Progress is important. HMS Dean Jeffrey Flier pointed out that the U.S. population is graying rapidly, meaning that people are not just living longer but are spending more time dealing with the ailments and conditions that often accompany aging, such as Alzheimer’s disease.

“People are living longer, but with that also comes the burden of disability, chronic disease, and [increased] cost,” Flier said. “We are in the midst of a very exciting period of basic aging research.”

Flier introduced an all-day scientific symposium on aging sponsored by the Medical School’s Paul F. Glenn Laboratories for the Biological Mechanisms of Aging. The symposium, held at the New Research Building, featured researchers addressing technical topics related to aging, including the roles of cellular power plants called mitochondria; aging in animal models such as the roundworm C. elegans; and the role of the human autophagy system, which regulates the destruction of molecules and structures inside the cell.

Bruce Yankner, co-director of the Paul F. Glenn Labs and professor of pathology and neurology at HMS, said the symposium was intended as a forum for scientists to share recent results in hope of not only spreading information but also of fostering collaboration among researchers who might not otherwise meet.

Among the presenters Monday was Li-Huei Tsai, director of the Picower Institute for Learning and Memory at the Massachusetts Institute of Technology. Tsai’s lab is investigating whether cognitive function can be restored after memory loss. In experiments with lab mice, research has shown that it can. Tsai and colleagues are investigating mechanisms through which this might happen, zeroing in on specific molecules that might be implicated in memory formation and cognitive decline.

Resveratrol, the compound hailed in red wine as an anti-aging agent, has been shown to have positive effects on learning and memory in laboratory animals, Tsai said, reducing loss of neurons and learning impairment.

“Resveratrol is actually even better than you think,” Tsai said.

Glenn, the donor behind the Glenn Labs’ creation, said he believes that the mechanisms of aging are mainly regulated by molecular biology, and therefore can be understood and possibly affected by scientists. Glenn, a Harvard Law School graduate who left the practice of law for investment banking, created a foundation to fund medical research into aging in 1965, when few people were paying attention to the field. Glenn said he became interested in the field in the ’50s after seeing his great-grandmother and then both his grandparents succumb to the symptoms of aging.

A lot of progress has been made, Glenn said, but much work remains.

“The mysteries are still there, but we’re getting closer,” Glenn said. “We don’t know what the ceiling is on the [human] lifespan — it’s going to get longer because it is a problem of molecular biology.”