‘You have to give back’ 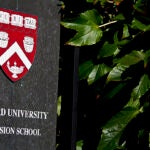 Portia Kwartema Botchway thought her high school days were behind her when she set her sights on Harvard back in 2006. Little did she know she would spend much of the next several years in that realm, first as a mentor for the Crimson Summer Academy (CSA), then as a Boston schoolteacher.

A native of Clemson, S.C., Botchway, who graduates from Harvard today (May 27), said she spent her first weeks on campus feeling a bit out of sorts. The New England culture was new. Like many incoming college students, being away from home was lonely, and Harvard at the outset was intimidating. Then, while dining one night in Annenberg Hall, she noticed a flier that said CSA was looking for undergraduates to mentor underprivileged high school students.

“I just thought about how lucky I’d been,” she said. “I had parents who really emphasized college. I had good teachers. To be able to give someone else that kind of environment was really attractive to me. These kids are very smart. They just haven’t had the same kinds of opportunities and prepping that I did.”

Founded in 2004 as part of an initiative to improve access to college for talented, economically disadvantaged students in the Boston and Cambridge areas, CSA brings students to campus for three consecutive summers in a rigorous academic program. Students live on campus and attend classes for five to seven weeks, and receive financial support in the form of laptop computers, stipends to replace lost summer earnings, year-round mentoring, and $3,000 scholarships to the colleges of their choice on completion.

One of the cornerstones of CSA’s success is the close relationships that the children develop with Harvard students, such as Botchway, who serve as CSA mentors. Made up of Harvard undergrads as well as graduates of the program, Harvard mentors serve as teaching assistants, role models, and tutors, helping students with everything from course work to navigating relationships with their roommates.

While Botchway thought she would be the one providing guidance, she was surprised to find that mentoring proved a two-way street. She gave her mentees help with homework or advice on the college selection process, and they helped her acclimate to her new home, guiding her through various neighborhoods, teaching her to navigate public transportation, and introducing her to Red Sox Nation.

“They gave me as much as I gave them,” she said. “CSA became an integral part of my experience at Harvard. No matter what else was going on, it was the one thing that was unceasingly amazing.”

Botchway enjoyed her role so much that she spent each undergraduate summer working for CSA, and will return this season. And as CSA has grown, she has been a key part of expanding the mentoring, which now includes tutoring for Crimson Scholars throughout the year.

Mentoring came naturally to Botchway. While some struggle with the challenges of overseeing students just a few years younger than they are, Botchway was able to balance being supportive of her students with the responsibilities of a role model.

“She exemplifies the kind of mentor that CSA strives to provide its scholars,” said Maxine Rodburg, who directs the program. “She’s always understood, admired, and supported the goal of CSA to help students reach their full potential. She has a deep sense of commitment and incredible passion for helping young people.”

An organismic and evolutionary biology student and member of Dunster House, Botchway originally planned to go to medical school. But her time with CSA inspired her to continue working with Boston students. This fall, she’ll start teaching at the Academy of the Pacific Rim, a charter school in Boston’s Hyde Park neighborhood.