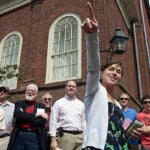 Classes are over, but the season isn’t for the Harvard women’s tennis team, which received an at-large bid from the NCAA Division I Tennis Subcommittee.

The 39th-ranked Crimson, who suffered their only Ivy League loss this year at the hands of Princeton, 5-2, finished the season winning eight of their last nine to complete the season with a 14-7 (6-1 Ivy League) record.

With the at-large bid, Harvard will compete against the Georgia Bulldogs in the first round of the tournament, held on May 14 at Clemson University. The victor will advance to take on the winner of the match between Clemson and the College of Charleston match.

In addition, sophomore Holly Cao, unanimous All-Ivy first-team selection and ranked No. 73 in the nation, will compete in the NCAA singles championships May 26-31 at the Dan Magill Tennis Complex in Athens, Ga.