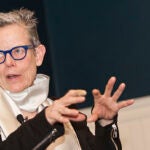 The applause was as much for the Fisk Opus 46 organ as it was for Jones, who is the Gund University Organist and Choirmaster in the Memorial Church. The towering instrument, in place since 1967, is being dismantled, and within a week will be shipped to a new Presbyterian church in Austin, Texas.

It is the first step in a two-year, donor-funded $6 million renovation effort. By fall, a 1929 Skinner Organ Co. instrument will grace Appleton, which is in the chancel of the church. By Easter 2012, a new custom-built Fisk organ will be in place in the second-floor rear gallery.

For the record, the last piece played on Appleton’s Fisk organ was Bach’s “Prelude and Fugue in C Major, BWV 545.” It was, said Jones afterward, a favorite of Charles B. Fisk ’49, whose Gloucester, Mass., C.B. Fisk Inc. designed and built the instrument.

And for the record too, Morning Prayers — the traditional 15-minute service at Appleton during the school year — never go beyond 9 a.m.

What was it like to hit that last note? Said Jones, “I’m glad I got it right.”

The night before (May 3), about 400 people gathered at the Memorial Church for the sixth and final C.B. Fisk Op. 46 Celebration Series of organ recitals and master classes. The series was presented in memory of the late John Raymond Ferris, who was Harvard’s University organist and choirmaster from 1958 to 1990.

“This is farewell,” said Peter J. Gomes, the Plummer Professor of Christian Morals and Pusey Minister in the Memorial Church, before the first note was played. “This is it. So enjoy it with all your passion and with all the imagination you can muster.”

Playing the final 7:30 p.m. recital was Christian Lane, an Eastman School-trained rising star in the organ world. He has been Harvard’s assistant University organist and choirmaster since 2008.

The audience watched Lane — playing alone in the chapel — on a video screen. It offered a side view of the performer, who wore a conservative dark suit. He played the keys with demonstrative flourish, and his feet glided over the pedals like a dancer.

The 10-piece program included work by Schumann and Shearing, as well as the world premiere of “Gloucester Estampie” by Carson Cooman ’04, composer-in-residence in the Memorial Church.

Fittingly, the last piece in the program was composed by John Knowles Paine (1839-1906), Harvard’s first professor of music and the University’s first organist and choirmaster.

“Concert Variations on the ‘Star Spangled Banner,’ Op. 4” ranged from the straight to the playful to the mournful. But the final variation was grand, full, and uplifting, like the occasion itself. After the final lingering note, at 9:02 p.m., there was a two-minute standing ovation.

At the back of the crowded church, someone said, “The audience always has the last word.”