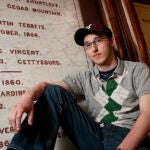 Sit a spell, and pass the sweet tea

It was a fight to the finish for the Harvard softball team, but that wasn’t enough for the Crimson as the Cornell Big Red defeated Harvard on May 8, 3-2, to earn the 2010 Ivy League Championship.

Harvard, after dropping game one of the Ivy League Championship Series, 3-1, used an extra-inning, three-run home run by Jennifer Francis ’10, to take game two of the series, 4-2, propelling Harvard into a decisive game three.

In the final game of the series, after falling behind 2-1, Harvard saw a fourth-inning Whitney Shaw ’12 home run clear the fence and even the game, 2-2. But in the bottom of the inning, Cornell got another run on the board, and the Crimson were unable to bounce back.

Harvard completed the regular season with a 26-13 record, claimed the Ivy League North Division title with a 17-3 record in the Ancient Eight, and earned a spot in the Ivy League Championship Series.